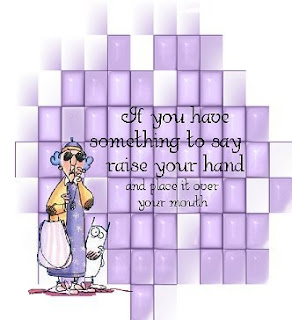 Suit Lover, before you read any further let me warn you that this post totally bashes your hero. It is completely one sided and its purpose is to portray him as the egotistical fool that he is. I suggest you skip reading it because it might make you cry.

Graduation was tonight and Suit was in all his glory. Instead of a nice, short sweet congratulatory speech, he began with his usual shtick--throwing old dirty hats, the hats taken in the halls, at the kids in the audience. I wasn't the only one who didn't find this antic amusing. He then went on to brain teasers and I went out into the hall. I made a phone call, used the bathroom and still had ten minutes left before I returned. I just couldn't take him. Now Suit Lover, I know you think that plenty of kids love him, but you are wrong. The kids walked out in droves too and they were complaining non stop about how long he droned on. No one stood up for him when he got up to speak. The applause was minimal and the same is true when he finished.

Listening to him was bad, but watching him while the graduates were called up on stage was painful. He sat facing the woman next to him and talked to her non stop. His body language showed his disinterest. Not one student stopped to shake his hand and he did not bother to stand up and congratulate any of them.

Actually, Suit did one thing that I enjoyed. He talked non stop to our key note speaker (a man I dislike more than Suit and if I wasn't afraid his name would give away the school, I would mention it here) and bored the man to tears.

Hopefully Suit will take the hint that his time is over and not return next year. But, if he does, you can be sure I will be here to bash him again.

Posted by Pissedoffteacher at 9:55 PM

I've seen pictures from the ceremony and afterwards with Hula and Suit posing with one student. So while he might not have congratulated her during the ceremony, he did afterwards.

As far as the rest of your post, I'll take your word for it.

So there was one kid he congratulated?

You certainly did not waste any time seeing those pictures.

And I must admit, I'm sad that I won't be seeing a reaction to the speech of the keynote speaker. It was the only way I was hoping to hear what he had to say. Sure beats the guy my graduating class got.

I figured you hated him more than Suit, and I heard the keynote's was another speech that, and I quote, "everytime it seemed like he was ending, it was just the beginning." I figured Suit would make a similar speech in your mind and spent the entire night anticipating an huge rant on here

And PO'ed, I can't help it when a friend uploads them on Facebook. (I know you don't believe me, and if it wouldn't reveal the school, I'd send you a link to them). But they were up, I saw them, and I must confess that there are quite a few of Suit speaking to the keynote on the stage.

I've been thinking about this further. I know I'm not welcome here and you said earlier you would never respond to my comments again, but I do have one more point to make.

Let's say that Suit did stand up and shake a few hands, congratulating them on their graduation. While you say that he didn't in an attack on him, isn't it fair to say that doing so would be asserting himself again and therefore impeding on Packemin's graduation. Maybe he was trying to take a back seat, letting Hula. as principal, do all the handshaking that occurred during the ceremony. While I admired and was inspired by an assistant principal at Packemin, I didn't go over and shake his hand after getting my diploma, and he didn't come to me while walking across the stage. Instead, he congratulated me after.

Suit held a private conversation the entire time the graduates were introduced.

And yes, there is nothing good I will ever say about him!