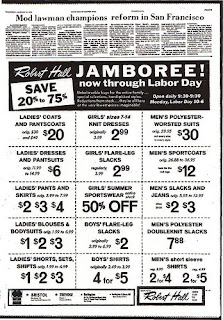 Robert Hall was a discount clothing store which flourished from 1938 - 1966. In fact, this store was a pioneer of the low overhead, large facility operation. Cheaply made goods, together with extensive advertising on television and radio led to the success of this operation. Their ads were catchy. Just thinking about how Bloomberg and Klein are touting increased graduation rates brought one of them to mind.

When the prices go down down down
And the values go up up up
Robert Hall this season
Will show you the reason
High quality! Economy

I just changed a few words and dedicate it to them:

When graduation rates go up up up
And learning goes down down down
Joel Klein will show you
The reason he gives you
Low quality! Economy

Yes, Klein and Bloomberg have economized on the education of the students of New York by:
1. Pushing credit recovery classes in place of real classes to make students repeat what they have not learned.
2. Boot camps and seat time to do the same as #1
3. Tests with passing grades so low no actual knowledge is required to pass them (actually, this comes from the state, not them--Merryl Tisch, you might want to look into this.)
4. Non-stop test prep so no real learning can take place.
5. Closing instead of fixing troubled schools causing other schools to be overcrowded.
6. Valuable resources and space given to charter schools.
7. The largest class size in the state
8. Continued harassment (rubber rooms and ATR treatments) of senior teachers.
9. Trailer classrooms in desperate need of repair.
10. Austerity budgets.
11. Aris
12. Tweed staff


Robert Hall closed its doors in 1966. Will Bloomberg and Klein be closing the doors on our children in the future? Will their education continue to be a huge warehouse of cheaply made goods and catchy phrases such as Keep It Going NYC Public Schools and this report from Gotham Schools?
Posted by Pissedoffteacher at 8:29 PM

Look what was on the Yahoo! home page today!!

I thought you might be interested. More people will see this than any blog. Maybe just enough will be outraged...

sorry it got chopped.