Teachers and The Gun

When I was still working, my five classes were usually in three different rooms, including several in the trailer.  I usually carried two book bags, my coat and a Delaney book because my overcrowded school had no where to store anything and I never knew what I would need.  Imagine me carrying a gun too?  No way!
Posted by Pissedoffteacher at 9:02 PM No comments: 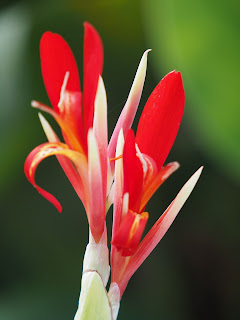 I met Linus on a recent trip to Saint Lucia.  He works in the landscape department but is more than a strong back with a green thumb.

Linus was the guide on our early morning nature walk.  He enthusiastically talked about all the flowers and his love of beautiful colors.  His faced glowed as he discussed the miracle of watching something he planted come to life.

I asked Linus how he got interested in what he was doing.  He explained that he grew up on a farm.  His mom had died when he was young and he and his siblings were being raised by a grandmother.  He often missed 2 to 3 days of school a week to work on the farm and left school completely at an early age to send his sister to the university.  (She is currently a teacher.)  Linus then showed us a tattered notebook he carries around, where he writes down everything new and explained all he knew was learned on the job and, while he knew a lot, he still had a lot to learn.  He even wrote down things he did not know from the conversation he had with a man on our tour.

The management of Sandal's recognized Linus' talent and sent him to Sandal's University to learn the skills he needs to become a supervisor.  He was due to start his new job the week after we left.

Linus, without book education is a brilliant young man.  Just shows, book learning is not for all but still, I wonder how far this man could have gone if he hadn't been forced to leave school.  I wonder if he would have found his gift if he had been forced to sit in a classroom with books full of things he had no interest in.
Posted by Pissedoffteacher at 7:38 PM No comments:

Posted by Pissedoffteacher at 7:18 PM No comments: