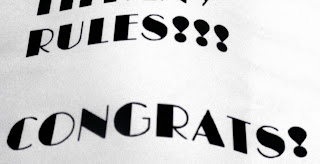 I knew the kids I am teaching in my AP class this semester are special, but I did not realize how special until awards night. These kids won award after award after award. By the end of the evening my hands and throat hurt from clapping and cheering so much.
These special kids are not the reason I go to this ceremony. This group is used to being honored and truthfully, to them, it is no big deal. No, the reason I go is for the group of kids who had to work extra hard, the group that success does not come to easily.
Mitch stopped me in the hall and begged me to come see him get his award. He didn't know what it was for, but he was excited. Another student told me that Mitch had family problems and didn't think anyone would be there for him. I made him a sign, like the one above, bought him some cheap plastic flowers and when they called his name, I waved the sign and gave him his gift. Today he told me that sign was the best thing he got. It is hanging over his bed.
Maria told me she was upset that her dad was going to show up. Nothing she ever did was good enough for him and she knew he would just put her down if she only got a little certificate. She didn't want anything to ruin her night because winning meant that Maria was amazing and she wanted to be amazing for one night. Maria's award was very special to me because I nominated her for it. She won $75 for the most improved math student. Again, her hugs and her thanks were more than enough to make me glad I attended the event.
Tina told me that her entire extended family was going to be present. Unlike Maria, she was thrilled that her dad was finally partaking in her life. She thought I might have recommended her for the award and she really was a close second to Maria. The award ceremony was almost over when Tina won her award, a gold medal. She was ecstatic and loved her sign too.
A few years ago, I taught a student who I worried would never do what he had to do to graduate. I told him time and time again that if he made it I would carry a sign at graduation saying "Toby has graduated." Well, Toby graduated and I carried the sign. I ran into him last week and he told me he still has that sign.
Don't get me wrong, I love my AP kids. They are a delight to teach. The truth is, anyone can teach these kids because they are so smart and so motivated. The other ones are the ones that need me. The other ones are the ones that make me feel like I am really earning my check.
Posted by Pissedoffteacher at 6:42 AM

That is EXACTLY how I feel, and what I usually say, when people ask me why I'm still working in the ghetto (in the murder capital of Chicago, if not the midwest!) instead of switching to the "safe" suburbs.