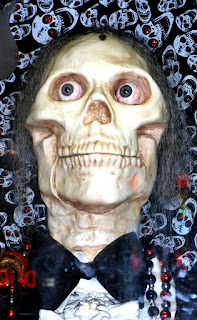 I don't know why I bothered to go. I just get myself aggravated and probably into trouble but it's just something I had to do. Please e-mail Mark Weprin at weprinm@assembly.state.ny.us for your own copy. I'm just going to hit on a few points here and publish the speech I would have liked to have given. I will add a few points to it and e-mail it to him directly.

1. Keep Mayoral Control.
According to Weprin, the law giving the mayor control of the system and the way it is being followed are totally different. In spite of this, he wants to extend the law with minor changes.

3. Broad-Based Accountability for Teachers and Principals
Weprin wants teachers and principals held to higher standards but he does not want these standards to be only test based. Although he wants us to be accountable, no where in is proposal is there a place for teacher and principal input.

4. Focus On Technology
This is probably where I lost control. He insists on smart boards and Internet. I questioned overcrowding, substandard trailers and lack of funds for tutoring and extra curricular activities.

5. Foster Parent Involvement
Again, no words on parent or teacher involvement in forming any of these policies.

I was surprised when the microphone made it to my hands. I was loudly applauding every teacher that spoke before me, everyone who spoke against mayoral control and spoke up against charter schools. But, make it to my hands it did. I introduced myself by name and said that I was a NYC high school teacher. I told the crowd that my school, built for 1800 held almost 5000. I told them about our leaky trailers and our split rooms. They asked me what school and thinking I shouldn't tell, I told. I told them how all their plans were still only politician driven, the crowd was on my side. Weprin and his buddy (I don't recall the other politician's name) looked upset and answered the question by talking about parent involvement.) At that point I got up and left.

I was with a friend who was very upset. She has many years left in the system and she is worried about her career. Two parents also left when I did. They too were devastated. One has a daughter at Van Buren HS. She is worried about her daughter and the Math B regents. She is worried about the quality of education her daughter is receiving there. She is upset because even though many parents had a choice as to where their child would attend school, she did not. Her daughter did not make it into her first or second choice and is attending the zoned school. She too wants mayoral control to end and was quite upset with what was coming out of this meeting.

Here is the speech I would have read:

I am a NYC HS teacher. I have been teaching since 1973. I am tier I. I can leave any day I choose, but I choose to stay because I love the city of NY and I love its children and I feel I am still a valuable contributor to their education.

In all my years of teaching, I have never seen the school system as low as it is now. I am not going to address the affect on teachers, we all know that teachers are over paid and underworked. I am going to talk about what mayoral control has done to the children of this city, particularly the high school children I work with on a daily basis.

Overcrowding is worse now than it has ever been. My school was built to hold 1800 and now holds close to 5000. We start at 7:15 AM and the last class ends after 5:00 PM. The mayor blames parents for sending their kids to schools like mine but he is the one that started the program giving parents more control over what schools their children attend. You cannot blame a parent for wanting the best possible education for their child. I did not send either of my children to our zoned high school because I worried about the quality of education and their safety so I can hardly blame any parent that does the same for their child. The mayor’s blaming overcrowding on parents is ridiculous.

Under Bloomberg, many schools have been closed down and then reopened as “mini schools.” Most of these mini schools have select populations so the “undesirables” are then sent to the larger schools and schools once considered good are now on the verge of being closed. These mini schools, schools of 400-500 students have a much higher ratio of administrators to students so more money is being spent but not on the education of our students. Closing schools and opening charter schools is not a solution either. Charter schools are small and have select populations. Children that don’t follow the rules are removed. These children are then returned to the public schools so the problems are not fixed.

Our ISS students are also being shortchanged. Instead of resource rooms, kids have “push ins”. While they might be getting extra help in English or history, there is no one around to help them with math and science. This is another money saving technique that is just not working.

The Bloomberg administration has also made deals with companies like McGraw Hill. We are forced to give “acuity” tests to our students, tests which take away valuable classroom time and accomplish nothing. Every qualified teacher can tell what their students need to learn from their own classroom assessments and those that can’t do this, should not be in the classroom and will not be able to gain any information from these expensive, time consuming tests either. These exams are just another way to waste money and hurt our students.

Let’s talk about the Quality Review, those guys from overseas that are determining whether our schools are well developed or in need of improvement. I’m not talking from bitterness. My school is a well developed one and I was observed by this team who happened to love my lesson. But, they also had no clue as to what I was doing. The math was way over their heads. How can their 2.5 days in our school mean anything? The money spent could have been better spent on fixing our leaking trailers, providing extra money for tutoring and other school activities.

Let’s talk about credit recovery and night school and the push to get kids out after 4 years. We aren’t giving them an education by doing this. We are giving them credits and turning them loose without the skills they need to survive in college and in life. I also teach in a community college and see how poorly so many of the students are prepared for success. Yes, we are graduating more but our diplomas mean less than they ever did before. It hurts me to see these students suffering and failing because of what has been done to them. One of my seniors this semester is also going to night school. He handed in a blank test paper this week and told me he can’t study or do homework because he just gets home too late. In the past, a child like this would have gone to summer school or graduated a term later. Now, it’s just give them tons of courses and get them out. No one cares whether they are learning anything or not.

Bloomberg treats our schools like a business. We are not a business. Or children do not turn a profit. It is time to realize this and start doing something about it. Mayoral control of the school system has got to end. Control has to be returned to educators. Teachers, people on the scene daily, need a bigger say in what should and must be done.
Posted by Pissedoffteacher at 12:57 PM

Bravo for going and speaking, but no, they probably paid no attention to you.

It takes real patience to sit there and listen while they are spouting their nonsense.

Go see Phoebe in Wonderland next weekend. I don't know if it is playing out by you, but it's at the itsy bitsy screen at the Angelika, on Houston at Mercer, by NYU.

If you have to listen to nonsense, let it be touching.

Great speech. You have my vote when you run. Or maybe I'll just run away too.

You really hit the mark with that one. We are turning out students who are less capable than ever, but the data (and we all know that we can never manipulate data!) makes it look like we are all graduating students with proficient skills.

I don't work at your school, but what you wrote is exactly what's going on in my school....

The only thing I would add is that teacher morale is so low now. The new solution to overcrowding is to have teachers differentiate instruction--we are now expected (at least in my school) to create several lesson plans for one class period--each catering to the various skills of each student. It's ludicrous!!!

This mayor and his cabal are vindictive, evil people and they are destroying public education and the lives of our children.

Son of Pissed Off said...

Mom, didn't I not go to our local high school and instead a different one because I wanted to go where my friends were going and not because you didn't want me to go to our local school?

You got me, son. but nevertheless, you had a choice of schools!

I keep coming back to this point.

Every qualified teacher can tell what their students need to learn from their own classroom assessments and those that can’t do this, should not be in the classroom and will not be able to gain any information from these expensive, time consuming tests either.

What do you suggest we do with those teachers who have no clue what students need. Are completely clueless about where there students are at and which students are struggling and seemed to never help those students who are in need of additional support?

I am curious as to what you would do?

Anonymous--I'll leave that problem to the administrators. That is why they get paid the big bucks.

I never even considered becoming one because I couldn't deal with those kind of problems.

I didnt have a choice for high school, I went where you made me, no matter how much I hated it.

Daughter--at least someone in your family had a choice. Your mom got you into a good school and you got a great education. I know you hated it, but that's life. Suck it up!

I still love you.