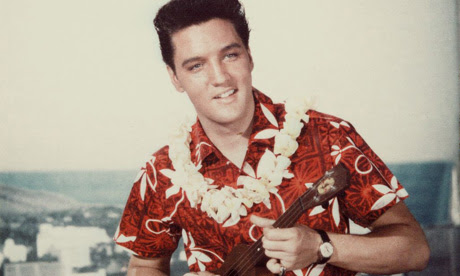 I promised a monument if there was a shade today. Sorry, this is the best I can do on such short notice. A monument is in the works.
Faster than a speeding bullet.
More powerful than a locomotive.
Able to leap tall buildings in a single bound.
Look! Up in the sky! It's a bird. It's a plane. It's Super Hula!
Yes, it's Super Hula - strange being from alternate universe who came to Packemin HS with powers and abilities far beyond those of mortal principals.
Super Hula - who can get things done, and who, disguised as Principal Hula, mild mannered man in a humongous NYC HS, fights the never ending battle for clean classrooms, computer access, window shades. 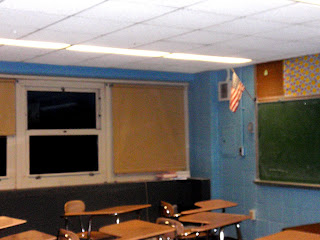 Before Super Hula got involved--the glare in the afternoon kept the kids from being able to see the board. 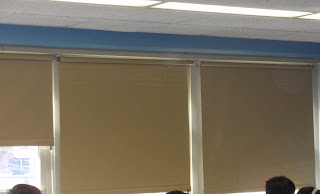 After Super Hula came on the scene.
Posted by Pissedoffteacher at 12:23 PM

Amazing! The kids can see! No glare!

I know how you feel! We have these antiquated blinds that took me four years to get in just the right spot. So guess what happened last summer... Yup, they decided to clean the blinds and put them all back up to the top of the window. (Windows which go all the way to the top of a 12 foot ceiling, mind you.) I got most of them back down, except the one by the board. I finally gave up, as I almost fell off the cointer a few times, and hung a few posters and a pocket-chart on the clothesline in front of the window. :-) No more glare!

Let me understand this. You are teaching in the greatest city in the world and you cannot get your window blind? I should be happy with my freezing classroom in po dunk southern state.