Consideration At Its Best 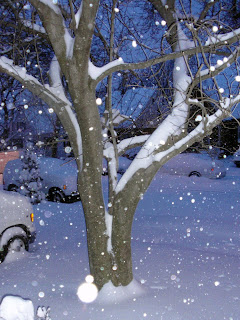 I opened the door to pick up the newspaper. I couldn't see where one step ended and the next began. I didn't think I would even find the paper but the Newsday delivery woman is smart. She put the paper in a brown bag. I made my way down the steps, wondering if the buses would be running. No NYC school closings had been announced as of 5:45 AM.

It is 6:10 AM. NYC just announced that schools will be closed. Nice of them to give us lots of notice.
My school has its first class at 7:15 and I was just about to walk out the door. I live close. Imagine the people that live far and already on their way.
Talk abut inconsiderate. Is it really so much worse now than it was three hours ago? Couldn't the announcement have been made then?
Posted by Pissedoffteacher at 6:10 AM

I wonder how many thousands of people woke up at 5 AM, like I did, with no idea the schools would close. I wonder how many were already on the road. I had a shovel in my hand and was getting ready to get my car out. I'd heard that WINS had announced the closing, but didn't hear it confirmed on TV and thought it must have been a mistake.

And waiting this long made it harder for the parents they claim to have been worrying about.

I heard the announcement on the radio at about a quarter to 6, then got out of bed to confirm it on TV because I was sure I was wrong.

I'm sure it was the yellow bus companies that made the decision, otherwise schools would have been open.

How is it in NYC ? I'm in the burbs and roads are passable. My car pool partner called me at 6:15. Of course my wife drove to work, but don't worry, she gave me assignments.

Well being on the late session sucks for many reasons(I happen to like it) but this is not one of those reasons. I awoke at 8, and within a few moments I knew via texts and the news that we were having the first snow day since 2004.

It is still snowing in Queens.

My street is not great but I am just off a major street. I'm goin for a walk soon to check it out.

Enjoy your day off.

Really surprised they closed; I guess the 2 hour delay is a difficult option. PO, You remind me of some teachers I had in the day, as they say. That's a good thing, by the way. I'm surprised they have trailers at schools in Queens; the borough used to have more clout. ( My old stomping ground ). Next time they predict 8 inches, they'll be open for sure.

I wasn't going to risk my life to go anywhere this morning, so I wasn't planning on going. My reward would have been to do one or more coverages. The last time I came in on a snow day I was treated to 5 classes in a row and was told I had to do a coverage because it was an "emergency". The only "emergency" was the fact that schools were open for the sole purpose of babysitting and state aid for the day. Common sense, so often missing in DOE decisions involving actual children, prevailed for a change.

When I was at my school I used to get there at 6:30 AM --hey call me crazy! I would have never known that school was clsed until I go there.

They just don't care about us!