Maybe This Is Why I Get Worked Up So Easily 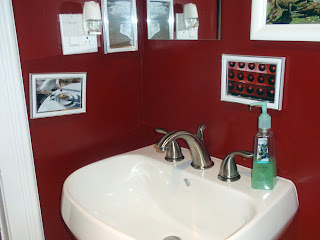 What does this say about me? Red has always been my favorite color. the above is a picture of my bathroom walls. I drove my husband and contractor crazy when I insisted I needed red. And, when we buy a new car, if it is my turn to pick, the car is always red.

How red and other colors affect us
BY RACHEL MAHAN Psychology Today
March 31, 2009
Everyone has a favorite color, but no color affects us as strongly as red. Here's some info on the hue:

COMPETING Putting on a red jersey could give you a competitive edge at the gym or in a pickup basketball game. According to a study from Durham University in England, Olympians wearing red uniforms perform better than those wearing blue in combat sports.

Be careful. You may be adversely affected by the guy in the red shirt next to you on the treadmill.

SOLVING The X's your teacher scrawled in red pen might have left indelible ink on your brain. German and American study participants who viewed a flash of red had more difficulty solving anagrams and completing analogies compared with those who saw green or neutral colors like black.

We probably associate red with mistakes or danger, says lead study author Andrew Elliot, a psychologist at the University of Rochester.

Similarly, subjects working on difficult tasks in a red room performed worse than those in a blue room, according to a study by Nancy Stone, a psychologist at Missouri University of Science and Technology, Rolla. Think twice about that scarlet lamp shade.

STANDING OUT Wearing red can get you noticed, and not just because it's a vivid color. When you see bright red, it may actually speed up your heart rate, says Barbara Drescher, a researcher at the University of California-Santa Barbara. Bright green can do the same, even though green is seen as the most pleasant hue, while red is rated least pleasant. Drescher isn't sure how long the arousal lasts.