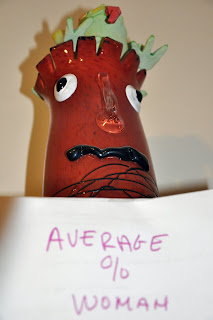 The sixty percent woman (meaning me) met with Mr. AP today to discuss her goals for the coming year. The meeting was put off as long as possible but since she did not want to be insubordinate (actually she did, but did not want to risk penalty that comes with it) the inevitable was faced.

The sixty percent woman thought she was prepared. She asked other teachers how their goal setting activity went and no one seemed to have a problem. She was sure she could get in and out in a few minutes and keep her sanity and her beliefs.

Mr. AP quickly opened his computer and read off three questions for me to think about in terms of goals. The technology part was easy. I've already been using all that data doo doo and I had good responses as to how I will continue to use it. The other questions were not as easy.

Goals, according to Mr. AP have to be measurable and what better way to measure them is there than statistics. Since I only have one regents class this semester, it seemed obvious to him that my goal should be to do better than the sixty percent I did last year. Now, a smart person would have agreed to let him type this up and left, not me. I refused to tie my goals to a number. He tried to get me to agree to set my passing goal to the department average. Again, I refused. He got frustrated, I got mad and thankfully the bell rang so I could go to class without a conclusion to the discussion.

I've been thinking about this percentage goal all afternoon. Why would I set a goal for my classes that means 70% pass? This really means my goal is for 30% to fail. And, if the school passing average is 83% should I aim for a 17% failure rate? Whether it is worded positively or negatively, neither one of these sound good to me. Even a 95% passing goal would be equivalent to a 5% failing goal.

I can't do anymore than I already do. I am always tutoring. I have even come in weekends. I hook weak kids up with brighter kids to give them extra help. I prepare study guides. I call parents. I check all the data. Unless he comes up with a plan, there is nothing more I can do and putting a number on it won't change anything.

My real goal is the same goal I've had since I started teaching over 30 years ago. That goal is to have 100% pass. The 100% woman is so much better sounding than the average percent woman. Realistically, knowing the students I have and the ones I am sure will transfer in next semester, this is not possible. So, Mr. AP won't like this goal because my not meeting it will reflect on him. I don't care how the school looks. I don't care if Mr. AP, Principal Hula and all the other administrators get their performance bonuses. I'm here for the kids and the kids only. I won't compromise myself by putting my name to a number I don't believe in.

I hope I haven't just ended the cease fire that took so long to come by.
Posted by Pissedoffteacher at 3:52 PM

I applaud you sentiment, and I have a suggestion.

Bring you class roster and ask him which 30% you should not have a goal for passing the regents. "Clearly you don't mean Eric. He's obviously going to pass, right? What about Jennifer? Is she one of the ones I shouldn't feel to bad about?"

This is a dumb goal for other reasons to. It is entirely teacher centric and pays no attention to the needs of your students, as individuals. It is far to easy for an administrator or policy person to abstract individual into numbers -- and at times it is necessary. But for a teacher to do so? Rarely a good idea.

I want 100% of my class to meet their individual goals. Which kids should I give up on if I do as you suggest?

Otherwise, I agree with you.

Hey POT:
I told you: they have turned teaching into an idiotic job and a job for an idiot. Your confused aquiescense to these educrats is sad. It is sad to see a once proud old-line teacher reduced to this state.

One thing I'm not clear on is what exactly is the purpose for having these goals. Presumably, they are intended to establish a clear statement of some things (about your teaching or perhaps your teaching environment) which you think could and should be improved on, and to also establish some way(s) that the goals could be achieved. Yet your description of the goal-setting process implies that the goals are also (or maybe primarily) intended to make it easier to establish that you have "failed" if you don't achieve the goals, presumably so that someone (Mr. AP) can then implement some consequences. If this second reason is in fact a reason for the goal-setting process, it appears to me to be more useful for setting you and Mr. AP up as antagonists, rather than two people who presumably want the same thing, i.e., higher quality of education for your students.

That said, while I don't know Mr. AP (or you), it may in fact be the case that you both really do want to improve the quality of education that your students receive, but you just disagree about the best way to state that as a set of goals. Using numbers or percents isn't necessarily a bad way to state goals. In particular, having a "100% passing rate," while appealing, may not be realistic for your students. You may be a fine teacher, but there's only one of you and there are only 24 hours in a day (and only 180 days in a school year). You may have some students for whom that's just not enough to get them to a passing grade. They may need to take the course more than once, or they may need help that you can't provide (intensive tutoring, a learning disability specialist, a stable home life, etc.).

I'm not suggesting that Mr. AP's goal is necessarily a good one; any numerical target that doesn't include some reasonable plan for achieving it is just another number on a page. But I'd also hate for you to think that having some of your students fail your class implies that you are a failure.

Your gaol ( sic ) should relate to what you are capable of doing, not what others can achieve; those are their goals.

Student goals are to be on top of their learning ( instead of each other ), communicate their needs, and make max effort, and the other bs.

By the way, did Mr. AP communicate his goals to you ?

Do you have to make goals? What are they used for? At my first school it was part of our literacy/coaching program, and our weekly "action plans" were tied to them. My second year it was used to create a binder for our pay-for-performance bonus. They tried it at my school here a few years ago, and everyone flipped out, especially the Union. So we turned them in but nothing ever happened with them.

Lance, you are right - some kids aren't going to pass. But we have to try. Even though we all know it is unrealistic, the government wants 100% to pass. Until NCLB is revised, the pressure is on. And doesn't any good teacher want all of her students to succeed? It killed me last year when I had several people tell me to leave my lowest kids out of my PSSA (PA state test) prep groups in the final 6 weeks before the test. But they had no chance of passing, so I focused on the kids who were on the bubble and just needed an extra push. Five months of quality instruction and test prep was going to have to be good enough for those three kids. (We doubled our reading score.)

Hey PO'd, you should say you want "access to IEPs" as one of your goals. ;-) How are you supposed to get any percent of students to pass if you're not being made aware of their Specially Designed Instruction accommodations?

My AP can't use access to IEPs to put me down. Actually, I have some pretty good goals, I think.

1. To set up a tutoring schedule and small group instruction with the help of my AP calculus kids to help my algebra kids develop the skills they need to pass the Algebra regents. (I;ve already put this plan into play and it is working great.)

2. To use ARIS and other data systems to get to know more about my students to be able to help them succeed.