I tried going back to sleep after the school closing announcement was made but I realized after 30 seconds that I was not going to be able to return to slumber land so I got up and shoveled and then took a walk. I wanted to see for myself how bad conditions were. What I saw was pretty, but not conducive to leaving the house. I kept thinking about why it took Mayor Money bags so long to decide to close schools. I just kept thinking MORON, IDIOT, HEARTLESS, INCONSIDERATE, CLUELESS, BASTARD, SELF CENTERED, CONCEITED... I welcome everyone to add their own descriptive words to the list. I'm sure there are many more that I missed. 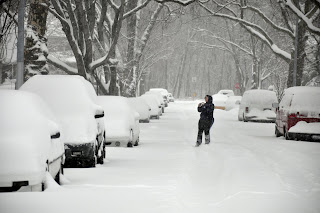 I'm not the only one out taking pictures. 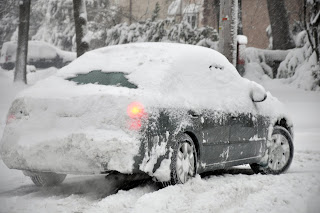 Would you believe this car was in motion? This guy has almost no visibility and it has nothing to do with the snow that is coming down at the moment. 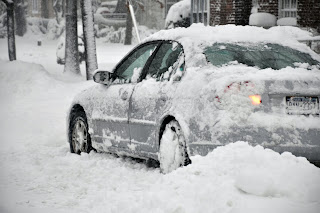 This guy was just spinning his wheels trying to get out. 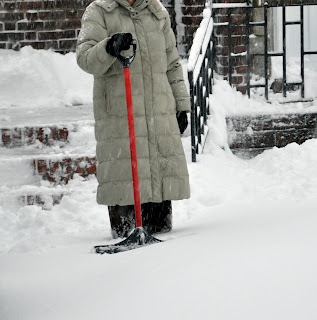 The sweetest person in the entire world was shoveling her snow as I walked by. She worries about her husband's health and makes sure to get up early and do all the shoveling herself before he gets up. 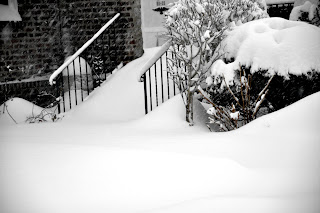 This person will have fun getting out of the house. You can't even see where one step begins and the next one ends. My own front door looked the same. 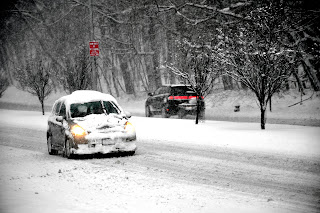 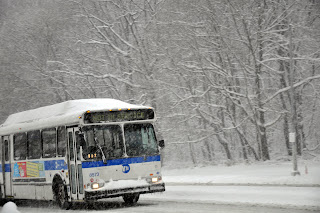 Even the bus had a not in service sign. 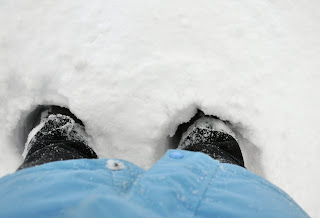 You can see the snow is almost above my boots. My coat comes down to just below my butt. 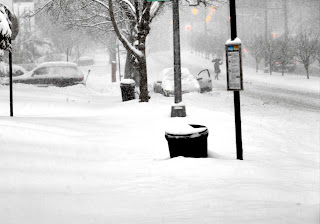 The bus stop. You can see how deep the snow is by observing the garbage can right next to it. The stop on the other side is next to a park with lots of branches hanging low. We've been warned to stay away from parks but it took until 5:30 to decide to close the schools. 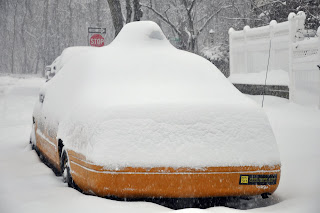 Even the taxi driver is taking the day off.
(I just added snow pictures to my facebook page a place I usually never even go to. It gave me another place to bash the mayor.)
Posted by Pissedoffteacher at 7:50 AM

Hey--I was gonna say the same thing. You really captured the day.

Kind of wish I was there. No snow this year in Seattle... but our schools close with 2 or 3 inches of snow because no one knows how to drive in it! Happy snow day to you- loved the pics.
Mrs. B

I called in at 4:15 and went back to sleep. He didn't want to close too early and look foolish. I wasn't going anywhere anyway.