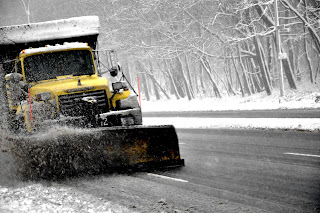 According to NY 1, branches are falling. Visibility is so poor you can't see more than a few inches in front of you. A news reporter showed the snow was up to her knees (and she is 5'4"). Another reporter talked about how the snow is just burning her face. A school bus driver was just interviewed. He said driving conditions were horrible and now he had to turn around and go home. Another bad thing is that if you are standing too close to the curb, you will get bombarded with salt from the trucks. (This happened to me during the last snow storm, but it was my own fault. I insisted on going out to take pictures.) The snow will keep falling all day.

All this, and it took Bloomberg until 5:30 to make his decision to close schools. Maybe he is smart and has some plan I can't figure out but, he has no heart and no common sense.

What I don't understand how we, as New Yorkers will forget this when he decides he wants a fourth term in office?

(We all forgot how he issued tickets to cars who could not be moved after the last ice storm. We forgot how he cancelled school buses on school children. We forgot all the other atrocities he has inflicted on this city in his tenure as mayor.)

311 finally changed their message to state schools are closed.

Posted by Pissedoffteacher at 6:08 AM

Three deaths have been blamed on the storm including one man who was killed by a falling tree limb in the Park.

Metro North has canceled service for now on the Harlem line due to falling trees.

It's a mess and many of the teachers in my building live up on Westchester (where I too once lived.)

Getting in would have been a (dangerous) nightmare.

But Bloomberg doesn't care much about that.

What I don't understand (and what I posted about last night) is why they called a snow day so early on Feb 10 when the storm was nowhere near as severe or dangerous as this one is but kept saying until very late that schools were open for this one.

Is there a rhyme or reason to closures?

Or does Bloomberg just consult his Magic 8 ball and go with that decision?

Or perhaps Mayor lacks common decency, but "didn't have a choice," to quote the Channel 2 weather guy.

Why the Dems did not use those facts laid out in your last paragraph during the campaign is beyond me.

You also forgot how arrogant he was towards the residents of Astoria calling them names as he praised his pals at ConEd.