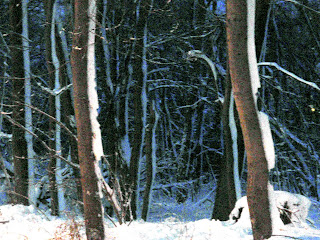 I heard someone say that if kids went to their neighborhood schools, attendance would have been way up today. Since I am on the slow side, I didn't think of a retort right away, but I do have one now.

The high school in my neighborhood is a mere four blocks from my house. Getting there would have been difficult as sidewalks were not shoveled and some side streets were not plowed.

Safety should come before everything else. The streets were not safe at 6 o'clock this morning, the time many students have to leave home to make it to period 1 on time. School was open and some teachers gave scheduled exams. They didn't worry about kids who for whatever reason, did not make it in. Lessons in most classes went on. The teachers couldn't worry about how the students who did not make it would catch up. Mayor Moron makes education a priority and since he makes all the decisions, safety (and education) came last.

I know NYC Ed doesn't consider the mayor a moron (he has quite a few other unfavorable words to use.) Anyone who who has such little regard for the well being of the people he is in charge of is one. According to dictionary.com, a moron is a person that lacks good judgement and on this issue Bloomberg is the personification of such a person.
Posted by Pissedoffteacher at 10:22 PM

I think it's more a question of how you view it. The mayor has excellent judgment if you look at it from the point of how effectively he enforces his anti-teacher, anti-union, anti-public school, anti-education, anti-working people agenda.

If, on the other hand, you think the safety of non-billionaires is important, his judgment is abysmal. The thing is, though, he doesn't seem to share that value, at least not as far as I can tell.

Giuliani was awful, always badmouthing teachers and saying we stink. Bloomberg has his buddies in the papers say those things and then gets done all the things Giuliani threatened. Rudy could never do it because he was always suing everyone.

It's dangerous to call demagogues like Bloomberg or GW morons. It causes people to underestimate them, and enables them to do even more damage. The thing is, their apparently stupid actions are deliberate. I think it's more a function of amorality and pathology than stupidity.

And I'm sad to say I find him more evil and pernicious than moronic. Some APs, for example, are moronic.

But that renders them utterly ineffectual as well.