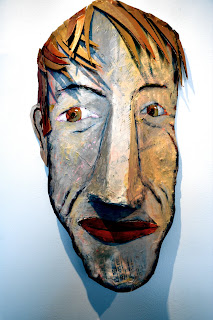 The boy who got suspended last week for bumping me came back last Friday. The first thing he did was apologize. We agreed to start over and he promised to work. That promise did not even last until he got to his seat in the back of the room. I called his parents after class. The new week started and there was minimum work Monday and Tuesday. Wednesday we were off for snow and Thursday he stayed home. Friday, exam day came. I told the class the exam would be Friday no matter what and to come in prepared to take it. Of course, most of them were not ready but they came in, did their usual effortless effort, carryied on slightly less than usual, but not him. He said didn't learn the stuff because "I suspended him." He wanted to go to guidance. I said no. He sat down and refused to do the exam. I wrote this on his conduct sheet and handed it back to him. He walked out but was picked up immediately by a dean (thank you, Principal Hula for making sure I have security close during that class). I sent an e-mail to his parents.
This kid is not criminal and he is not stupid, but he is so immature it is pathetic. He only understands "me, me, me" and anything short of catering to his every whim gets his back against the wall. From conversations with his parents, I know they try. I know he gets punished because the day after a phone call home, I feel his wrath because of the consequences he is faced there. Not only don't I know what to do with him, I don't think his parents know what to do with him. It is so sad.
And, he is only one of about 25 that show up on a regular basis.
Posted by Pissedoffteacher at 10:51 AM

I have no idea his age, but here are some of my charmers who are 17.
1) I told him he can pass my class but he needs to be in class (this was in the detention room). He told me that the administrators and teachers keep picking on him and writing him up. I kept replying: Make better choices.

2) Student told me I am picking on him and have already decided to fail him. I know his mother turned him and his siblings in to DFACS last year because of their behavior - she wanted the state to take them. He hasn't changed.

3) Kid who needs to pass but keeps getting written up for vocabulary and skipping keeps cussing and skipping.

I just want to tell them: drop out or grow up! But I can't.