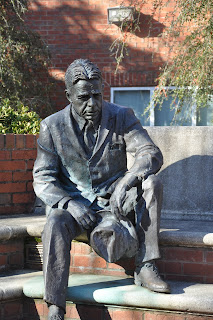 I got a chance to read The Atlanta Journal-Constitution while on vacation. The paper was full of education news, from cheating scandals to school closings. Crawford Lewis, the DeKalb County superintendent is closing schools and laying off staff to make up a budget deficit. In fact, in response to people being out of a job he said "It's important now that every salary counts." At the same time, the district posted a job to replace a deputy superintendent of learning for $163,900 while calling for teacher pay cuts. The superintendent does not intend to give back his $15,000 raise that was approved in January. To quote him again, "I don't think $13,000 is going to have a profound impact on an $88 million deficit."

Now, Is he stupid? Does he think the public is too stupid to catch on? Or, does he really not give a damn? Personally, I vote for all three.

(Picture George C. Griffin--among other things, a math instructor at Georgia Tech. It was fitting that Ricochet and I took a picture with him. Sorry, that one will not be posted here.)

Posted by Pissedoffteacher at 4:03 PM

Glad you had a good visit. It's always great to meet fellow bloggers in person!