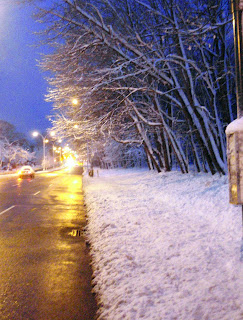 The path to the bus is not shoveled. 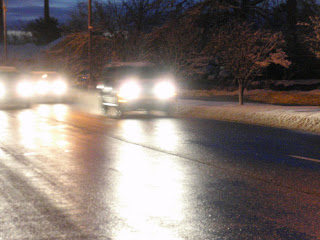 Notice the island in the middle and the height of the snow. 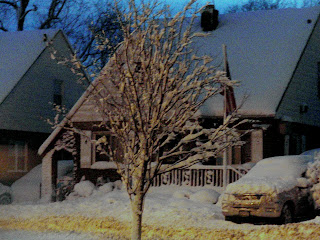 The other street that had to be crossed. 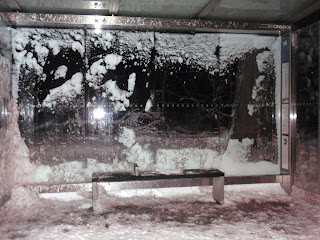 Mayor Moron was right, roads were open and transportation was running close to normal. The snow did end when it was supposed to and the city did send out enough sanitation trucks to get the school entrance ways cleared and to make sure public transportation would operate on time.

What Mayor Moron never took into account was the actual trip to the bus and from the trip from the bus to the school. My house is midway down the block and across the street from the bus stop. Somebody, maybe Dennis Walcott, a long time Queens resident, should have reminded the mayor that home owners do not have to get up at 5 AM to shovel their walks. I found the snow pretty deep as I made my way to the corner. Crossing was also quite dangerous. The curb was a slushy mess and no path was made to the street. The island in the middle of the block had snow almost up to my knees. A woman grabbed on to me as she approached the bus stop and we both almost fell. Getting off at school was no better. The city owned sidewalk was not shoveled. There was no way I could have driven. Although we dug out three times, city plows kept coming by and blocking us in again. I don't understand how some streets don't get plowed at all and my little street gets plowed so often.

I am not complaining about having to go to work. I know I am fortunate to work at a job that allows me to take a sick day for times like this. Some people have to show up or risk lsoing their jobs. But, for the mayor to go on television and tell everyone that the city will be up and running with no problems is unconscionable. Schools could have been opened with a two hour delay so parents would have time to dig out their cars and safely transport their children. More teachers would have shown up and some more of that learning he talked about might have taken place. Instead hundreds of students stayed home and I heard, although my number might be wrong, 53 teachers were out as well.

Mayor Moron stood at the podium yesterday and commended all the city workers who showed up at work yesterday. He didn't miss the chance to put in a dig about teachers when he said "all workers except for the department of education had excellent attendance." He knew full well that schools were closed and there was no reason for us to be at work.
Posted by Pissedoffteacher at 3:07 PM

I too will be writing about the idiot mayor. I saw what you experienced and felt terrible watching middleb & high schoolers trying to get to school with unplowed roads and unshoveled sidewalks.

He's just such a little bitch, isn't he? And that annoying girlie voice with that smarmy attitude.....his lack of concern for children's safety is so blatant!!

Well, I'm no fan, but I don't think he's a moron, and I wish he were. The dig at teachers, at contract time, goes right along with all the nonsense that's popping up in the tabloids.

And he didn't open the schools because he's stupid--he did so because he's utterly indifferent to the welfare of 1.1 million kids and 100,000 UFT employees. That doesn't make him a good guy or anything, but it's a significant distinction.

Packemin's plan today I thought was brilliant! (seriously) Movie day all day. The thing I wonder though, did so many stay home because of legitimate hassles due to the snow, or because of Mayor Smarmy's tone last night towards us? Subconscious protest, perhaps?

I'll agree with NYC Ed about the mayor's indifference to the kids' welfare But, the way he announced it on tv was moronic. How could he possibly predict the weather?

I don't think people stayed home to protest. The streets were awful this morning. It took hours to dig out cars and the buses did not run as well as Bloomberg promised they would. I believe most people stayed home for safety reasons.

While I have no problem with Packemin's plan, mostly because it meant I didn't have to do a coverage, I still believe the safety of NYC students was not considered at all.

Once again, anonymous, you are trying to change the topic.

This *Anonymous* commenter is not trying to change the topic, just making an observation...