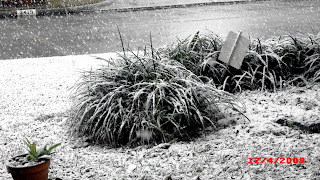 We arrived in Houston expecting snow drifts over our heads. After all, the city was crippled by this major storm, schools were closed early and flights were suspended. Instead, we found cars, grass and trees with a sprinkling of the white stuff. My sister said some parts of town had an inch of snow.

I do understand why this minuscule amount crippled a major city. They aren't used to snow. I heard that it has only snowed 34 times since weather has been recorded and it never snowed this early in the year.

This year I've been rained on in two trips (Switzerland and Canada) , marooned on a ship do to a hurricane and now snowed on in a city that never snows. I'll be in Jamaica in a few weeks. I'm dreading what the weather will bring me there.
Posted by Pissedoffteacher at 6:25 AM

You are beginning to sound like Joe Btfsplk - or, at least, the Joe Btfsplk of weather. I wish you sunny skies and warm weather.

As someone who has lived in the South - Southern snow is crippling to a city but the joy of most of the inhabitants. It may have been an inconvenience to you - but did your BIL see it as something joyful to see? I hope so.

Our snow today came down in a light sprinkling and was gone by the time I finished my cup of tea. Joyful!