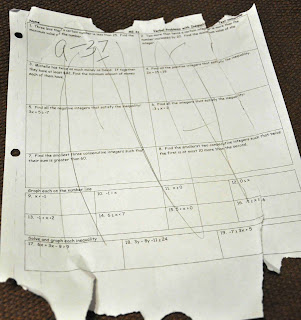 I spent a period with the Inquiry Team leader looking at the report card grades of my ninth graders. The only conclusion we arrived at so far is that the majority of my class is in the bottom third of the school and that most of these kids are taking general science instead of living environment. We discussed why some of these kids are able to pass English but not other major subjects and the answer we arrived at (unscientifically) was not pretty so I won't go into it here.

The main thing I noticed was that some of the kids I thought should have been in the bottom third weren't included in that category and kids I thought were way above it were included. The team leader thought this might be because some of the lower level kids work very hard, which is something I agree with. On the other side, I believe that some of the kids included just don't care enough to work hard at all. They have the brains and don't use them. I think this idea was something he hadn't thought about before.

The bottom line in all of this is that data alone is not an answer.

We had our monthly departmental meeting today and once again the bashing and blaming continued. If our passing percentages aren't at least up to the department's average, we are to blame, especially if we are a twenty year veteran teacher. (The young ones are allowed to have lower stats.) Out of the forty minutes, 30 minutes were spent on the incompetence of some members of our department. (Since there are only a handful of us veterans left, we all know which teachers were being referred to.) Education doesn't matter, statistics are all that counts. He as much as said that, if all we do is teach to the regents, that is okay with him, as long as our results are good. Once again I am falling into the failing category by at least 7%. He said he didn't want to see our names come across the Principal's desk and that he is concerned for us.

Once again, I am ready and willing to have my name lead the list. I know I am doing my best to educate my students. My standards are low enough without making them even lower to meet his numbers. I know many of my colleagues will just start passing even more kids because that was the message we were given. I just walked out on my ninth period class. Pictured above is a worksheet belonging to one of the boys in the class. The photo was taken 30 minutes into the period. I can't get him (and at least 6 others) to do a thing. Passing these kids along would be an outrageous lie that I am not willing to tell.
Posted by Pissedoffteacher at 3:40 PM

So this is what it comes down to--passing anything that takes up space. How unfair to those that truly work towards their grades. I wonder if the Queens high schools that made the top High School list also use phony methods?? I can tell you my principal does not like holding kids back, especially if she can throw them into the Jr. High and make it their problem. She actually told 2 5th-grade teachers to make sure they pass the year end's promotional assessment using any means so she could get rid of them.

These are kids who were failing since they entered the school. And yes, different means were used to help them, but they all had one thing in common--parents who did not take an interest in their schooling. Yes the were well dressed, but education was not a priority in their households. They were left with babysitters and TV most of the time. And when this pattern happens within the same families, it's quite telling. But that's our fault too.

Hey, we're doing inequalities in algebra I too! I too, have seen my fair share of crumpled assignments. Makes me sad and a little pissed off since I stress over and over that I am willing to help everyone who needs extra help.

As an English teacher--first year and certainly aware of my own shortcomings--I'm curious about your assessment of why more kids are passing English. I know that I often find myself in the position of having to decide, "Do I try to guess what this kid meant and give him the benefit of the doubt on the grade, or do I stick to a standard that another English teacher--let alone a math teacher or an administrator--might disagree with?" When a quarter of my students don't even hand anything in, it's tough to flunk kids who are handing in basically complete, almost on-topic work. Then again...my grades each marking period only remotely reflect mastery of the subject. Several of the students with the highest grades in my class got those grades just by doing extra work. They might not burn up the English Regents (or they might, now that it's getting easier) but they're doing a lot of extra reading and writing to get those grades so that's gotta count for something, right?

I often envy my colleagues in the math department--this is, of course, a profession full of double-edged swords, but I wouldn't mind having papers with *right* or *wrong* answers to show my colleagues before I flunk kids.

And--is there a place for giving credit for showing up and doing the work? Some of my kids are really at that level, where they need to learn to do that first. So partial credit reigns supreme.

Anyway, I really enjoy your blog--it's a great perspective for me as a new teacher in a different discipline. Thanks!

I have 2 kids who will not do ANYTHING to help themselves pass. One wants to drop out and one tells me he's lazy. I can see no difference in failing him with a 20 or a 65 except with a 65 he could do very little more and pass.

For the classes I teach, it really makes no difference. And how sad is that.

You partially described our assessment of why kids pass in English and not math and other subjects.

What you describe as showing up and doing work amounts to what we think of as "seat time". If I am going to pass a kid in algebra or geometry, the kid must know something about the subject. Truthfully, the kids that show up and do the work usually end up passing, although Mr. AP wants them to pass the regents as well. For so many, doing nothing is the norm and that gets no credit.

your problem is not UNIQUE. given all of the other responses, it seems like a lot of people have YOUR problem.

your post intimates an idea of unfair comparison in progress and bash the use of statistics.

look to how the progress report compares schools. they look at their peer horizon, i.e. schools that deal with the same demographics.

now, I don't know how your principal gets your stats and compares you, but it's also unfair to say that given a certain type of student, it is impossible and it's unfair to ride on your credentials year in and out without looking at what you're NOT doing.

There have always been teachers that manage to get rid of the most difficult students. Somehow, these kids always end up in my classes.

I agree that everyone should be able to succeed with difficult students at some points but just look at numbers doesn't show this.

I find it worrisome that your AP doesn't get what an average is.... The goal that everyone should be at least average shows a mind-bogglingly weak grasp of baby-stats. Surely a math department would get this...

The most difficult ( class management wise ) kids who actually disrupt the class continually have to be grouped together in one class, given workbooks and handouts, working in groups, and a few will actually do something. Those left in the other classes will do much better.
We have done this, just not to the necessary extent.

Philadelphia Public Schools has mandated that no child can be given a failing grade unless he/she has been classified as special ed.

This means that students can literally do *nothing* and still pass. Since we don't have Regents in PA, a student can graduate from Phil schools without ever lifting a pen or pencil.