The JROTC had their winter banquet last night. The cadets get to show off their award winning stuff and their is plenty of food to eat. These guys really know how to organize and get things done. Even the buffet line runs with military precision.

I had so many better pictures but I wanted to make sure there were no faces in any and since the banquet was so well attended, this was difficult to do. 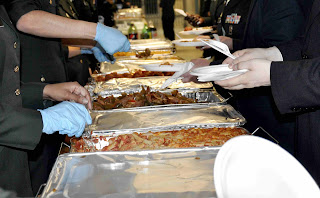 The boys raider team. Our overcrowded school forces them to tie their ropes between posts in the cafeteria but these kids don't let their poor facilities keep them down. The human bridge was a sight to see. 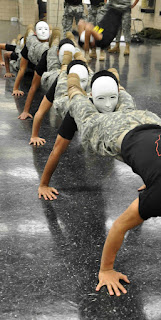 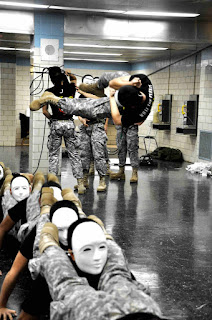 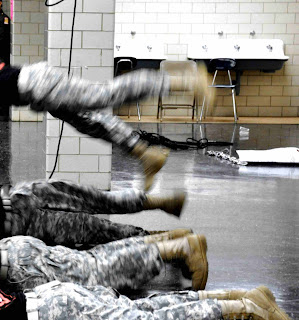 The girls in their unarmed performance move with a precision that would make the Rockettes jealous. 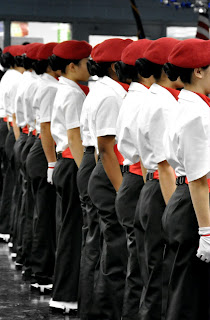 I hate the rifles and used to bitch about them so much that the Sargent in charge started calling them sticks to keep me happy. These kids are fantastic.
The girl's raider team 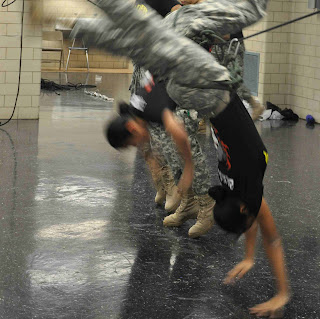 Posted by Pissedoffteacher at 10:32 PM

We are a small county so you hear the stories from the other 2 high schools. One of them has a nationally ranked JROTC program - has been for several years.

The have a new colonel. He is a Fobbit (REMF) but believes since he is a colonel it is his program. The program has been run by 2 sergeants for years - one of them developed the program.

On all sorts of levels the new colonel should be humble. He is new to high school and he is new to program that has already proved itself.

He is arrogant instead.

It will be interesting if they retain their national ranking. (BTW they have had it for years).

Our program was first run by a colonel as well. I hated the program then. He was also arrogant and thougth because of his rank others had to acquiesce to his demands. Needless to say, I did not and we had many head butting incidents. The people in charge now are great.

As a veteran ( reserves ) I believe the discipline of the program helps the students in their academics as well. It's unfortunate that a new officer has to feel that a successful program has to be modified just because a new person is in charge. But the military is rank oriented.

You need to beat yourself and say fifteen recitations of the following liturgy:

"They're going there to see their mare."

No need to approve this comment. Just perform the penance.