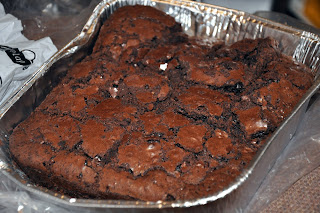 He didn't have to buy any kosher food, it wasn't even expected. Still, it would have been nice if everyone could eat. Mostly, he didn't have to make a big deal about not buying it. I've been to many parties I couldn't eat at and no one ever said they didn't have to buy food for me. In fact, most apologized for having nothing I could eat.
I told him I couldn't eat the food, but I planned on going to socialize for a while (even though I originally planned a boycott.) I even baked brownies to bring. But, his comments about the food and his comments about my being a bad teacher were more than enough to keep me away.
My students enjoyed the brownies.
Posted by Pissedoffteacher at 7:13 PM

Brownies belong in the tummies of those who truly appreciate them!