Ed Deformers Make Me Want To Hurt Someone 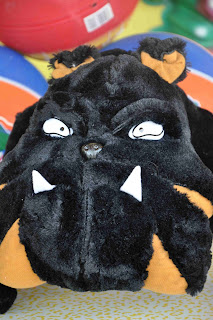 I started out only half listening to South Bronx Teacher's broadcast last night. (I was working on some lesson planning at the time.) But, the more I listened, the more the broadcast got my interest and the faster my blood boiled. I swear, I would be behind bars right now if that ed deformer Grunfeld and I were in the same room. This jerk only knows one thing about teachers and that has to do with data. He has absolutely no clue as to what goes on in a classroom and just the thought of people like him having the ability to decide if I am competent at my job makes me want to cry. It also makes me glad I am at the end of my career and have nothing to worry about when it comes to guys like this one.
Anyway, I didn't start this post to continue the beating he got last night. All this data stuff reminded me of an incident that occurred during an AP exam several years ago. Mohammad, an extremely bright and hardworking young man, accidentally skipped one line while bubbling answers on the scan tron for his BC exam. Unfortunately, the skipped line was at the beginning of the test. Because of this, his answers were marked incorrect and instead of the 5 he should have earned, he got a 1 on the exam. Relying on data would make this child and his teacher look incompetent and both were anything but that.
Everyone wants good teachers in the school, everyone, even the teachers. We don't want to clean up other people's messes when we pick up kids who can't do the work they should. We don't want classes of 34 because we are "good" while someone else gets a class of 10 because he is "not". But, test scores are not the way to determine this.
Good principals and good APs know what is going on in every classroom. They see with their own eyes and hear with their own ears what the kids are doing and learning every day. They hear what kids say, and listen. They should able to judge if what they are hearing is worth investigating. (We do need a way to police these principals as there are too many unscrupulous ones around that use their authority to hurt good teachers.) In spite of what most people think, teachers do not have life long jobs. Tenure protects and guarantees due process, but that is all it does. Everyday, teachers lose their jobs. Some deserve to lose them and many do not.
So don't blame unions, don't blame tenure and certainly don't look at data to know if your child's teacher is proficient or not. Look at the whole picture.
BTW Grunfeld, that math teacher understand statistics much better than you ever will. Many years ago, we had a teacher in my department who scared the crap out of all but the best kids. When program cards were given out, the kids lined up at guidance, begging and pleading for a program change. She also manged to remove any kid who was failing. Her stats were always the best in the department and this was thrown in the face of every other teacher for years. Another teacher in my department was driven to a sabbatical by some rough kids. A new, pretty young thing was hired to take her place. The first thing that happened was the worst offenders in her classes were removed. Her stats and her classroom management were much better than that of the person she took over from. Fair? I don't think so. Would you want your career's future managed this way? I doubt that very much. Don't talk about all things being equitable. In real life, they never are.
I don't know anything about LAUSD but I do know about the NYC DOE. It has been shown that the tests are invalid. Why would anyone in his right mind want his child's teachers evaluated using these invalid instruments of measure?
Posted by Pissedoffteacher at 9:50 PM

"many years ago, we had a teacher in my department who scared the crap out of all but the best kids. When program cards were given out, the kids lined up at guidance, begging and pleading for a program change."

oh I can most definitely think of another one of those teachers in the more recent past that made class a living hell. That said, I got a 98 on the Math B Regents because of how easy it was compared to what he put us through. And he managed to do it without removing any kids from the class.

This is why I always had a lesson on how to manage the bubble sheet. One small misplaced answer can screw up a good kid's academic life.

btw, I had the same reaction to NBC's so-called Education Forum. I commented I didn't trust the media and was told by them it would be fair and balanced. Then I found out who was on the panel. Every piece of deformer out there. Totally sick to my stomach.

btw, I linked this to the SUPPORT page and it also got linked by another on the NBC FB (education de-formers) page "Education Nation". One person wrote that you should be one of the teachers chosen for the show. I agree!

Los Angeles is where they are posting teachers' names in the LATimes with the blessings of Duncan.

Hey! You didn't get a beating, you gave one! It was a KO! You exposed him and his ilk of how little they know and understand. You were great. He had nothing to say other than, "IT'S IN THE DATA!!"

I couldn't agree more. I heard another program on NPR about letting high school kids evaluating their teachers. Statisticians invaded every discipline. What can we do?