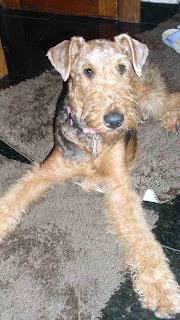 It seems everyone has a chihuahua story. I usually don't go with guest posts, but I got this one from the guy posted above and I wanted to share. Enjoy.

Even though he became pack leader he knew himself that it is was only from his bark being the loudest of the pack. In the beginning he was able to use the older, wiser Chihuahuas for their knowledge, wisdom and loyalty to past leaders. The older chihuahuas were always respected by others, something the young pup wanted and longed for. He came up with a brilliant idea and even licked paws at the thought that it was all his idea! He gathered new, young chihuahuas, ones that other packs didn't want. He would give them a home, food and a pack to be part of. He would win them over. He would have his own pack of loyal chihuahuas, ones that thought he was the wisest and the most knowledgeable! He stood up in pride as he watched these new puppies all around him, doing whatever he asked and barking whenever he asked. One problem: the young chihuahuas also wandered toward the older wiser Chihuahuas. They also knew of their wisdom and knowledge. The pack leader did not like what was going on. How would he be able to control them? Get them to bark when he wanted? He made sure that the young chihuahuas were busy with menial jobs when the older dogs were gathered and resting. They would never get a chance to be together. He would make sure their loyalty stayed with him.
Posted by Pissedoffteacher at 8:56 AM

I hear the cats are very unhappy with you blogging for their enemy.

No, the cats gave their permission. They hate chihuahau's too.