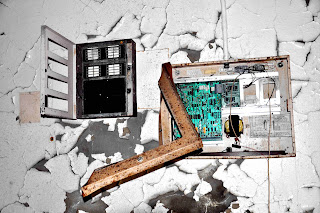 No place to call home makes people cranky.  Walking around with everything you own on your back makes it ache.  Using filthy public computers that are too slow and often not working well makes using the computer undesirable.  Standing over a smelly garbage can while calling a parent and then running back to the disgusting computer to log the call and relay a message to guidance hurts a lunch appetite.

Teachers aren't the only ones over worked.  Guidance counselors have way many kids on their case loads and there is no physical way for them to know all of them, let alone help them.  For most, the kid is just a name on a page and even the most conscientious has an impossible job.

No matter what anyone thinks, working in an over utilized, over stuffed building like the one Packemin is in, is not good for anyone.  It causes short fuses and it makes people say and do things they often wish they could retract.  Today's emphasis on grades and standardized exams puts undo pressure on everyone and pushes all to the breaking point.

I might not have to worry about certain things, but seeing what goes on and passes for an education hurts.  Seeing how the school system has deteriorated under the terror reign of Bloomberg makes it impossible to sit back and say and do nothing.

I apologize to anyone who has been hurt by anything written on this blog, but I don't retract anything I have written.  The majority of the people that work at Packemin HS, whether they be teachers, counselors, paras, school aides, cafeteria workers or security are fine hard working people.  It is conditions they work under that are not so fine.

Posted by Pissedoffteacher at 4:18 PM

There is nothing wrong with expressing opinions about the harsh conditions that are plaguing the system. Its not the people, but the system that is destroying the conditions for staff to work as well the appropriate accommodations for students. I have also been a casualty from the harsh 'seemingly unfair' bureaucratic system.

Ms. PO'd, please do NOT apologize for telling it like it is. I'm teaching 25 years and I see the same things. We do not have the tools to work with (my current school has no gym for instance and we are not alone!), and this faux chancellor does not want to look at this very basic fact. You express our frustrations and we thank you for it.