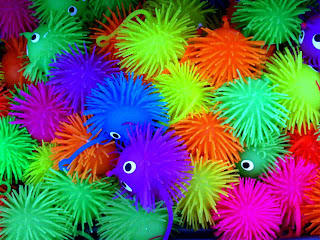 Today was test number one for my algebra kids.

My period 7 class has 34 kids in it, 34 kids who show up on a regular basis.  They aren't a bad group but they need non stop monitoring.  No one would believe the sounds that came out of some while they were taking the test.  They weren't cheating or even talking just making some strange noises which, I'm not even sure some knew they were making.  It was a very strange situation.  Proctoring this group was much harder than teaching them.

My period 9 class has  register of 19.  I probably shouldn't advertise this but with computers and all, someone will pick it up anyway and the dynamics will change.  Today, one went home sick, two new admits did not show and one regular was absent.  Because it is a small group and very manageable, I called the father of my absent girl while the kids were working.  Naturally he had no idea as to why she was not in class and although he did not jump to conclusions, he said he would get an answer about her attendance when she got home.  The best thing about the call was the reaction of the kids in the class.  They couldn't believe I had done that.  They told me they wouldn't mess around with me because I mess around with them.  One girl, with a history of cutting said, "Damn, I'm glad I saw that.  Now I am never going to cut this class."

The ed deformers never mention class size.  The Post accused a Queens high school of crying crocodile tears because they filed a law suit about class size.   I couldn't have made the call I did period 7.  Small classes are a big part of the answer.

(BTW, I have a letter to the editor in the Post relating to this article.)
Posted by Pissedoffteacher at 4:43 PM

Be careful. That kid/parent could complain that you made her info public by making that phone call. You could do this years ago, but now, they could pull you from your classroom.

You may not want to advertise this.

Amen. I love how people who really have no realistic clue about what's what in teaching make the decisions about teaching and schooling.

Your school should have an attendance officer whose job it is to call absent kids. My children's school uses an automated system. Your job is to teach. You should not have done this during class time.

If they pull, they pull. At this point of my career I do what I think it best for the kids and don't worry about anything else.

We have an attendance clerk and an attendance officer and we still are responsible for making the phone calls about tardies and absences. Nobody has figured out how to add automated calling to the attendance/grading software.

We have no one to call for us. I don't think we have an attendance teacher anymore. When we did, we had one person with over 400 kids. In fact, we are expected to call for attendance, lateness, homework, tests, phones, and anything else you can think of. No one wants to even do anything about a kid unless we have made an initial contact or two with the kid. Even the guidance department expects us to act first.

You did the right thing by calling. It was what the edumorons call a teachable moment.

The flip side of it is that you were in violations of the ridiculous and stupid reichchancellors regulation a421,

So idiotically worded that every teacher, every day, makes the little angels feel uncomfortable.

Keep on doing what you do and don't listen to the foolish critics who have invalid opinions, similar to those of the shake and bake maladminstrators.

Absences: It's policy to call home if a child is absent more than 3-5 days. (Following the death of a child to abusive parents). Someone at the school is required to do that. Not the teacher.

I too would be weary of using the cell phone in class. I know you are in a position to leave at any time, but not with a "dishonorable discharge." Thankfully, you made your point to the students.

I never use my own cell phone to call homes.

Class size is what matters most. It's not relativistic quantum mechanics, or even brain surgery, it's simple basic math.

A class filled with 34 students cannot have the teacher's individual attention for even two minutes. A class of twenty can.

Imagine being able to teach your lesson and then have enough time to work with every student, answer their questions and see their progress on an individual basis during every class!

But no, let's completely avoid discussing the merits of smaller class size and instead create a witch hunt of "bad" teachers...