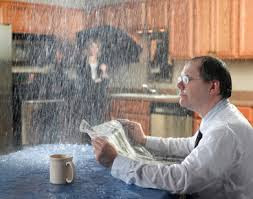 We called the contractor.  He said, "It's raining, that is what happens."

He showed up today and is now trying to claim it is not his fault the roof is leaking.  He said we have holes under the aluminum siding.  Funny, its never been a problem before.

Insurance comes this week but we have a high deductible.  It's off to small claims court again.
Posted by Pissedoffteacher at 9:32 AM

oy, so sorry...not what you need to deal with right before Pesach.

PLEASE go to The People's Court, cuz I'd pay money to watch you smash this guy! ;-)

Seriously, I feel for you and the aggravation you're dealing with right now. This guy sounds like a first class jerk.

Just keep telling yourself (as I have been with my neighbor) what goes around etc. And karma is a bitch.

Sorry this contactor's work wasn't as good as it should have been...I hope you get a solid roof and justice soon!

Obviously, the City needs to institute a value-added data analysis system for contractors so we know which ones to shut down.

OMG!! I remember your first leak.
This doesn't sound right. Too many stupid excuses.

Report him the the BBB.

The contractor’s answer of “It’s raining, that’s what happens,” is totally unacceptable. Roofs are supposed to be the main source of protection of any building or home, which means there should be no weaknesses in it. It’s not natural for roofs to have leaks during rain. His attitude about fixing it was not acceptable either. Let’s hope the fixing goes well, and your roof fares better during rainy season after your contractor and his crew are done.

I totally agree with Rodney! The roofer’s attitude is entirely wrong. Roofs are our first line of defense against the elements. The roofer should have had more sense of urgency. I hope that he got your roof fixed well enough for it to withstand the storms that came that year!

He fixed it temporarily. We took him to some sort of consumer court and got a full refund. Tony Avella, our councilman really helped out.