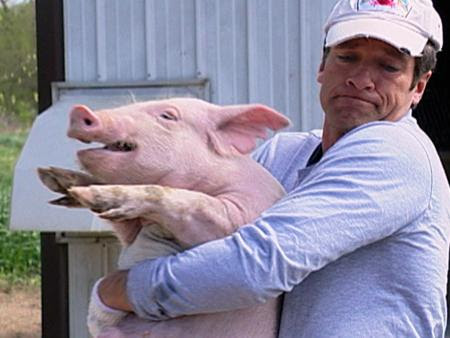 The series on Bad Teachers who didn't need union protection to keep their jobs continues here.
﻿
Zoo Keeper came to school every day smelling like the cages he cleaned early every morning.  His clothes not only smelled the part, they looked the part too.  One day he wore one with all the buttons missing.   I stapled it shut to hide the raggedy tee shirt he had underneath.  The term I had the misfortune of following him into a room had me carrying a can of air freshener.  The kids refused to enter until the air was cleared.

Smell was not Zoo Keeper's only fault.  He was a lazy bastard whose daily lesson consisted of ripping a page from a book, photocopying it and handing it to the kids to do.  The ones who didn't cut were afraid of him and sat quietly and worked, learning next to nothing.  The AP knew he was bad but was too afraid to start with him.  The principal, too, left him alone.

Zoo Keeper taught the lowest level classes in the department and for this, the other teachers were grateful.  They didn't have to deal with these children.  Zoo Keeper claimed he didn't know the higher level math and that was all he could handle.  Even when it came to marking regents, Zoo Keeper claimed ignorance and got away with doing nothing.

In addition to his smell and his lack of teaching, Zoo Keeper took a week off every year to go to Florida.  He always had some family member's funeral to attend to.  No one bothered to check whether this was true or not.  No one wanted to deal with his wrath.

One day, the big bad boys in Albany decided that high schools would no longer teach remedial math.  This  meant Zoo Keeper would have to start teaching.  There was only one thing left for him to do and that was retire.

The union didn't protect Zoo Keeper.  The administration did.  He got away with behavior like this his entire career.
Posted by Pissedoffteacher at 9:42 AM

It makes you wonder as to who hires these teachers,

I also wrote about "bad teachers" in my blog as well.

It is those zoo keepers that make us blackboard educators pissed off.

More people need to realize that it is administrators who keep these 'bad teachers' in their positions, NOT the unions.

I worked with many zoo keepers. They all had one thing in common--they were either friendly with the administration, or had connections. Either way, the rest of the staff knew they were incompetent.

The thing is, even with the new evaluation system, these teachers can still pass muster if administrators are too afraid to do their jobs. As for the tests, I am sure teachers like these cheat.

The Bloomberg administration counted on our resentment toward the crappy teachers and the principal's pets in the building. He told us he was going to get rid of them so that the rest of us could teach.

Almost ten years later, we can see that he wasn't after the crappy teacher at all. He was after tenure, seniority rights, and career professionals. He has closed many schools, throwing thousands of teachers into ATR pools. He has waged an effective media campaign that blames teachers and their unions for everything that is wrong with public education. He is well on his way to privatizing the whole system.

In the bad old days we had crappy teachers, crappy A.P's, crappy principals, and a crappy bureaucracy, but Bloomberg is much worse. He is a tyrant that is installing a system in which critical thinking and honest dissent are punished. He is antidemocratic. His methods remind of Orwell's 1984. He scares me.

He scares me too, especially since the admins of today have no idea as to who is a good teacher and who isn't.