Stop Looking For The Nazis Under Your Bed 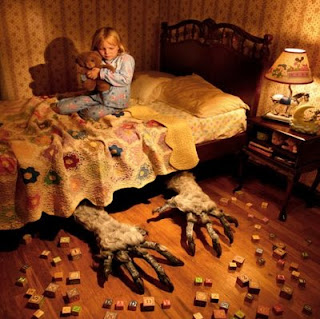 My Aunt Ida is afraid of everything, and has been for as long as I can remember. She was a young adult during World War II and always worried about the Nazis coming to get her, even though she lived her entire life in Brooklyn and the Bronx.

There are lots of teachers with 20 or more years experience and no negative file letters who share the same mentality. Fear is emitted from every pore of their body after every encounter with an administrator, no matter how harmless or meaningless it is. They have simple requests, but are afraid to voice them. They worry when an admin walks in their room but are afraid to ask why. They agonize and fantasize the worst case scenarios but do nothing to help alleviate the pain.

A group of teachers planned a meeting with an admin to discuss a relevant issue. At first, they were all gung ho. They started getting nervous and little by little, they dropped out of the discussion and claimed they were not a part of it to begin with and did not want to get on any body's bad side. They all waited for someone else to do the deed.

The fact of the matter is that bad things happen to good people and teachers are no exception. But, hiding in a closet is not going to keep the Nazis away. If they want someone, they will get them. Me, I'm a resistance fighter. I might have some fears but I will not show them and if I lose, I'll make sure I cause some injury on the way down. We wonder how the teaching profession has changed so drastically but it is obvious when you look around.

I started teaching a zillion years ago, in the 70's. I went on strike, risked my job, jail and got hit with Taylor Law penalties. The economy wasn't so great then, but it was the right thing to do. I have no regrets. I had an AP that was the devil herself. As a department, we united and fought her. We refused to speak at meetings. Our CL, with our support, lived in the Principal's office. The principal fought hard and got her to retire. We won because we stood together and were not afraid.

Standing up is not easy but it is the only way. The only person anyone can depend upon is themselves and if everyone does this, think of the strong group we would create. We could stop hiding and defeat those Nazis under the bed.
Posted by Pissedoffteacher at 4:00 PM

Isn't undermining people who have, in the past, been able to afford to fight the system without fearing losing their jobs, one of the reasons the "crusade" to weaken tenure being waged? Should the DOE succeed, in the end, who will be left to fight absurd reforms?

I entirely agree. We tend to be wimps not fighters. I am like you a resistance fighter.