Another Child Being Left Behind 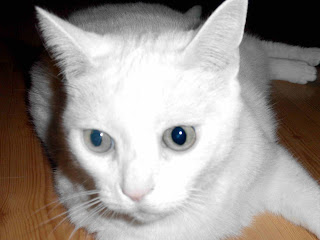 Julia could do almost nothing on Thursday's exam. Even using notes, her mind went totally blank. I was sure she knew nothing because she spent most of every period laughing and carrying on with her two friends.

Most of the class did horribly, even the few that work so Friday I decided to just redo some of the same problems on the board. Julia's buddies decided to make the three day weekend a four day weekend, which left Julia bored enough to actually work.

Julia wrote down the questions and then called me over to help her. I asked her to read the question and then began questioning her about the words? "What is the relationship between the diameter of a circle and its radius?" Without flinching, and in a complete sentence she said, "The radius is equal to half the diameter." I then told her to look at the problem again and see what she could do. "The diameter is 4x + 12 and the radius is 48 so 2x + 6 = 48. She then wrote the equation and solved it.

I went over to her again a few times during the period and every question we discussed, she did correctly. I praised her and asked her if she would like to take her final exam orally as she seems to do much better that way. She smiled and said yes. (I don't know if she will actually show up to do it but I am hopeful she really wants to pass.)

Julia is in the lowest third of our school. She obviously has learning difficulties that were never addressed but I never doubted the very intelligent girl that lives within her. We have data up the kazoo, data showing that Julia has a hard time in school, both behaviorally and academically, yet nothing has ever been done to address her problems and help her overcome them. I feel awful. Julia will only be with me for another 9 days and I have done so little to help her. How long will it take her new teacher to pick up on her problem? Suppose I find the teacher, tell him about how best to work with her and the teacher hasn't the time or the ambition? Will Julia just become another statistic in the world of drop outs? Why isn't any money being used to help kids like her?
Posted by Pissedoffteacher at 11:00 AM

This student never received any services?? I believe you have the right as one of her teachers to refer her. I was always amazed that kids I had in the upper elementary grades were never referred. And I would hear some teachers actually say they didn't want to do the paperwork. Hopefully someone will put in the paperwork for her next semester.