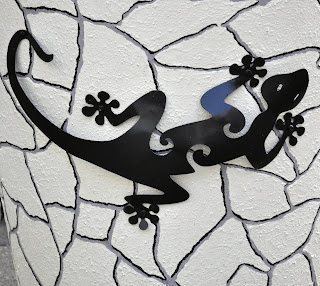 Ms. H and I were trailer buddies around the time of Columbine. Although I am tough on the outside, our vulnerability out there began to bother me and I requested that she lock her trailer door when her class was over and she left.

Ms. H told me she couldn't do that. She had another class right after the trailer that happened to be opposite the Principal's office. She refused to be late for that one even though it meant letting her trailer class leave 8 - 10 minutes early or just leaving the kids in the room when she left.

The kids that stayed behind were quite rambunctious. When I spoke to her, she shrugged her shoulders and said there was nothing she could do about it.

Needless to say, I was not happy. A door connected the two rooms and anyone could enter hers and then waltz into mine without any problem. The noisy kids she left behind were also an issue.

I told Ms H that I would speak to the administration as her problem was jeopardizing my class and my safety. She told me to do what I had to do and I did just that. the next day she was removed from the trailer.

Ms H no longer speaks to me, although this incident happened many years ago. I'm sure she considers me a snitch, but I have no problems being called such a thing. This time the shoe fit and I wear it proudly. (In case anyone is wondering, Ms H is not a dirty talker. I bet no one is surprised to read that.)
Posted by Pissedoffteacher at 10:40 AM

I've had a similar issue with the teacher next door to me. Our classrooms are connected and I practically had to plead with her to lock her classroom when she left it. For security reasons we are supposed to keep our doors locked at all times and it really irritated me that she could not remember to do so. Last year was her first at my school (and 2nd year teaching)so I never said anything to the administration. This year, however, if she fails to remember to lock her door I will do exactly as you did. How hard is it to remember to lock your door when you leave? AND if she doesn't care about the safety of my belongings (we don't have any cabinets that lock) doesn't she care about her own?!