Taking The Easy Way Out 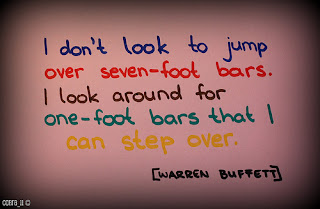 ﻿
As I looked at my algebra class last week, I thought, are any of these kids capable of passing geometry?  Do any of them want to even try the class? What are their future goals?  Will they need more math to achieve them? As I looked at them, I said to myself, "Do I have the right to play G-d with them?  Do I have the right to say they can't go ahead and try?  Will programming them for an easier class in the fall term be detrimental to all their career goals"

As we begin the fifth marking period of the year, we are constantly reminded that our grades will be used to determine the placement of students for September.  Giving one person that much power over another's  fate doesn't seem fair or right.  Some of these people have little experience but even the ones with years behind them (me included) have been proven wrong.

A young teacher in my department commented that she hoped the only kids who would be allowed to take geometry/trigonometry next year would be the ones who were given approval by their current teacher.  Another was overheard telling a parent that her daughter should drop geometry/trigonometry because the girl had no shot of passing.  Isn't it possible the these kids could pass with different teachers or on the second time around?  This whole emphasis on statistics and no child being left behind is killing the future education of many.

It is true that many of the students don't belong in higher math classes and don't even want to be there, but this isn't true for all.  I've seen students no one ( mostly one person) says will ever pass (we alsways had to find a back door to the more advanced class) go on to ace AP calculus and successfully major in math or engineering in college.  I've had kids  I never thought could do it, and time and time again I am proven wrong.

My friend over at Math Tales From The Spring is going through some of these same issues now, trying to advise kids on the proper classes to take next term.  She and I disagree on this point, but maybe she is right.  Maybe we should just put them in the classes we know they can pass.  This will be easier on everyone in the long run.
Posted by Pissedoffteacher at 8:58 AM

While it is not a perfect system, and some kids do make progress, I would much rather go with a teacher recommendation than some test result.
Middle school will not place kids in both ELA and Math honors if they don't get 4s on BOTH tests. When I would meet with the AP, I would fight for my kids who are good at math but not so great with ELA or vice versa.

In Texas, the idiots in the Texas Senate pushed through a bill that forced high schoolers to take 4 years of math. They were saying "all kids should be ready for college." I know kids in trig this year that have not a clue, nor do they even want to go to college. Luckily, the trig teacher knows this and she will give these kids a 70 for "trying." The problem is this, to many a high school teacher math is the last thing on their mind. I know this because I have the same problem in my economics class. Why the State of Texas wanted non college bound kids to learn some of the more difficult concepts of microeconomics is beyond me?

It is my belief that students who do not take geometry will never be able to think logically. I know I am in the minority on this, but..

My feelings are let kids try. If they can't make it, the course can be changed into one that is not regents level. The kids will still be exposed to higher math.

What sort of choices do you have? Here everyone takes Algebra, then Geometry. Then, depending on how long it takes them to pass (and many never do) there are 3 options for the next year.

I agree with you p.o.'d.I will be forever grateful to my college history prof who didn't go by the rules and flunk me for not knowing how to write a paper. He handed it back with the 'see me' note and then filled in the parts that my rural high school was not able to provide along with the redo opportunity. Why penalize a student for an adult's lack of fulfilling responsibilities?

My own son cannot get into honors or AP English. Seems his teachers don't understand the OT when she says that says that some gifted boys cannot physically write beautifully at this age. He can take it from Johns Hopkins' talent search program (at my expense) though, unlike most of his peers who are scheduled into the AP classes - his PSATs show he has the knowledge and thinking skills that his teachers refuse to acknowledge.