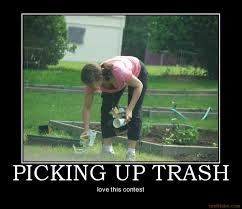 ﻿
New Boy looked like trouble from day one, the way he sauntered in with his hat on and phone in hand.  He said he was transferred into my class because he did not get along with his previous teacher.  I'm not surprised.  She said she caught him photographing an exam with the intention of sending it to a friend for answers.  He always had his phone or i-Pod out and was generally a bad influence on others in the class.

On his first day the class had an exam.  I told him not to worry about it, I just wanted to see what he knew.  I found he knew nothing and he told me it was all the teacher's fault.  Exam 2 was a little better, but not much.  His attendance is not great but he hasn't been a nuisance yet, either.

Yesterday he came into class and told me he had to see his counselor.  He returned at the end of the period and told me he was going to be suspended because "I disrespected her.  I told her to learn how to do her job."  He was quite proud of his actions.

Today I asked the original teacher about New Boy.  (I like to give every student the benefit of the doubt and did not want to judge him based on someone elses experience.)  The teacher told me his history and told me he was taken out because he got in her face and she felt threatened.  She told me who made the change, and, to say I'm not pissed would be like me saying Bloomberg is the best thing that ever happened to education in NYC.  No one bothered to give me a heads up about this kid.

I've had it.   It used to be senior teachers were respected.  Now all we are good for is picking up the stuff no one wants to deal with.

Low class pathological liars and their disgusting henchmen are busy making yet another "dump on the senior teacher" decision. You are not alone, believe me.

Harassment comes in all forms. I hope the former teacher lodged safety a complaint via the union but I doubt it!

No, get out, no one cares about teachers anymore. We are now seen as lower than the trashman.
Go, and don't look back...

It is actually a shame that teachers feel that they do need to leave and get out. Its not what the profession is/was supposed to be like.