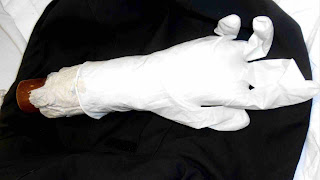 ﻿
Last Sunday night my dad did not feel well.  I wasn't overly concerned because we've gone that route before.  He feels sick, I panic and run over and he ends up feeling fine when I get there.  He promised to call if he didn't feel better but not before telling me if I call in the morning and he doesn't answer, I should call security and have them break down his door.

Monday morning I called at my usual 6:45 and there was no answer.  I didn't worry.  I tried his cell phone and got him on third ring.  He had been up a quite a bit overnight and slept late.  Now, I was worried.  He never sleeps past 6.  At 9:30, between classes, I called again.  There was no answer so I assumed he walked over to his doctor's office.  For once, I stayed calm.  At 10:30 my cell phone rang with a number I didn't recognize but I knew the exchange was one from his neighborhood.  I answered immediately, apologizing to my class and got the call I always expected but was not prepared for.   It was the receptionist at his doctor's office.  She told me he was having trouble breathing and they called an ambulance to take him to the hospital.  She told me not to worry as he seemed better when he left, but now the panic set in.  My dad never does things alone and I pictured this poor old man, alone and scared and I raced to the hospital to be with him.  (Bless my school for making it so easy for me to leave in the middle of the day.) I called my husband and he picked me up so we could get to the hospital quicker.

My husband dropped me at the ER so I could run in while he looked for a parking spot, not an easy thing to find near Einstein Hospital in the Bronx.  I ran in only to find my dad flirting with the young, pretty EMT who brought him in.  As soon as he got out of his wheel chair he started walking around, introducing himself to everyone and having a fine old time.  Every nurse, orderly, doctor and cleaner got to hear his life story, starting from the time he was 8 until the present.  In fact, this visit seemed to be the highlight of his week, until they told him he had to stay a few days.

He went home tired and a little confused from the hospital stay.    He was sure they gave him something in the hospital that messed with his brain.  Thankfully this bout only lasted a day.  We'll know results of the tests in two weeks.  Keep your fingers crossed.

(In case you are wondering about the picture, the umbrella was soaked.  This was my sad attempt  to keep everything it came in contact with dry.)
Posted by Pissedoffteacher at 7:12 AM

My family's prayers are with you.

I enjoyed reading your story. Take care of dad, he is the only dad you will have. Don't appreciate him after it is too late.
Yes, I will say a prayer as well.

Hope all turns out well. I know how hard it is when a parent lives far from you. I traveled many times from Queens to Brooklyn with my heart racing.