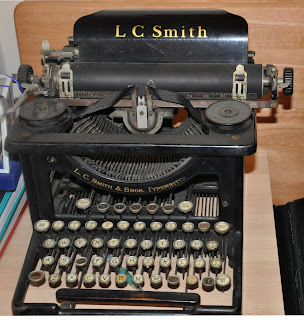 Mrs.Gottlieb, my seventh grade typing teacher stood barely 5 ft tall. But, this tiny woman packed a punch that would have knocked Mike Tyson out, even in his hay day. I remember the class, a pretty rough bunch, being terrified of her. She demanded perfect posture and two hands on the key board at all times. Twice a week, we walked into her room, opened up the manual in front of us and typed away, learning the position of the keys as we went. I remember how she spent a period teaching us the proper way to open the book. If we dared let the cover drop, the loud bang caused her to emit the deadliest looks and loudest screams anyone had ever heard.

I totally forgot about this little red headed monster until a colleague commented on the way I typed as I wrote a college recommendation and he surfed the Internet in the cafe this week. He was amazed at the dexterity I exhibited, using two hands and the way I never had to look at the keys.

I know today that her harshness was a harshness of love. Even her exams showed her love. She took 5 points off for every mistake, but stopped deducting points once the mark hit 55. Everyone in our class had a 55 average and no one failed.

If Ms. Gottlieb was around today, she would probably be in a rubber room somewhere, charged with child abuse for the way she treated us. Yes, she was tough, and mean, but she got us to learn what we were supposed to learn. My skills would not be what they are today if I had not been exposed to her.

(Pictured above is the typewriter I practiced at home on. It was my mom's, bought in 1927. It still sits in my home, not far from this computer and while it is no longer used, I don't want to ever forget it.)
Posted by Pissedoffteacher at 3:41 PM

Wow, this flashed me back to my typing class from high school! Our teacher was the Typing Nazi, but man, can I type! ;-)

And the high school where I went had "phases", so phase 2 was remedial and phase 5 was college prep. All the phase 5/AP classes were at the same time as the typing classes, which meant they assumed only the remedial kids would need to know how to type? To this day I can't type properly, though I am fast. I just look crazy :)

Eyes on the text, not the KEYS!