I just paid off on a bet that I was happy to lose. The reward I got from this $40 gave me a high that will last for a very long time.

Last year I made a deal with Rosie. I told her that if she managed to turn herself around and pass all her subjects, I would take her and her best friend to Applebee's for lunch. I made the bet never expecting to have to make good on it.

Well, little did I know that this little bundle of energy had had enough play time and was ready to buckle down and get serious. She showed me her report cards after the first and second marking period, both with not only passing grades, but with good grades. And, although I haven't seen her latest one, I have no reason to doubt her so I made good on my bet today.

Rosie is still Rosie. We couldn't find her when we were ready to leave. While waiting, she sent a text to her friend that she would meet us at the restaurant. We got to the place and there was no Rosie. She finally showed up twenty minutes late.

During lunch, Rosie credited me with turning her school career around. She then asked me why I bothered with her so much more than I bothered with others. At first, it was hard to find the reason. I know her brother scared me when I met him and I did fear there might have been some abuse going on at home and if so, I wanted the school to investigate. I looked at Rosie's data and saw that just one year earlier, she had been a model student and wondered what could have caused the change. But then I looked across the table and came up with the real reason I kept pursuing Rosie. That reason was her good friend Harriet. Harriet is one of the finest students I have ever met. She is bright, sweet and hard working. She is respectful of her parents, her teachers and her peers. There is no way Harriet would hang out with Rosie if Rosie was the delinquent she appeared to be. It might be wrong, but we do judge others by the company they keep and there is no finer company than Harriet.

Rosie is now talking about going to college. She wants to become a counselor and help kids who waste their lives the way she was wasting hers. She will attend a community college but not the local one. She knows she needs to get away from the people she messed up her life with.

The lunch cost me $40 but the satisfaction I am feeling right now is priceless. 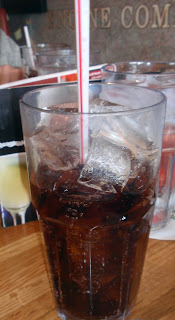 My lunch--I don't eat at Applebee's. They have almost nothing vegetarian on their menu. 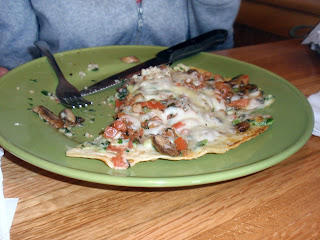 Harriet's lunch--she doesn't eat meat either so she was stuck with their pizza. 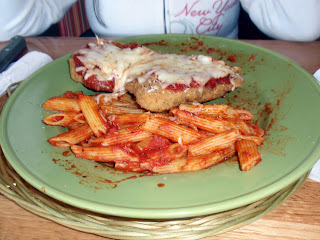 Rosie's chicken parmigiana--for a little girl, she sure managed to pack it away.
Posted by Pissedoffteacher at 7:59 AM

You saved that Starfish!!

Wonderful story! It's what teachers want to do for their students. When they turn around and succeed, it's a high that only another teacher can understand.

Let's see. Your AP reads this story and claims you were dating students. SCI investigates and you are not only in the "rubber room" but taken off payroll for up to three months.

In the real word anon. is right but this is the crazy world of the DOE.

I can't worry about that. If that were to happen, I would retire on the spot. I have to be true to myself and when I can't be true anymore, I am gone from teaching.

BTW, I did call her mother and get permission for the meal before I met her.

I am sure you have read my posts concerning SCI and OSI it is not about the truth it is about getting the teacher and they would certainly omit the fact in their report that the parent approved of the lunch.

Their motto is don't let the facts interfere with a good story.

Your points are irrefutable especially since the DoE are vindictive, but I agree with POD.

I've rewarded my students with simple prizes, out for pizza, ice creams, or a nice t-shirt with a positive slogan. But, I have always made sure that parents were aware of the event in writing and they've responded in writing.

It is a crazy world, with so many cynical people living in it, but I still believe in an innocent act of kindness especially for those students who mean a great deal a teacher who sees them turn around.