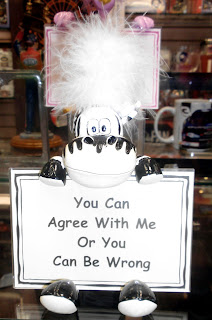 I probably shouldn't be writing this, but after reading Chaz's last post, I have to.

Schools are in serious trouble. Many of the kids are incapable of learning what we are required to teach them. Vocational and general education programs were eliminated because they were used as dumping grounds and were stratified racially.

The kids are not learning and not succeeding. My racially diverse school has kids failing, kids representing all ethnic groups. And, while vocational programs might have been segregated, lower level classes, repeater classes and advanced placement classes are segregated as well. We've done away with the programs but not with the racial issues when we did away with these schools.

Goals seems to be the new catch phrase that will help everyone succeed. A girl in the tenth grade, whose goal is to have an organized notebook, will never be able to master any levels of higher learning. The same is true about the eleventh grade boy whose goal is to come to class daily or even the ninth grader whose goal is to stop being a disruptive influence in class.

Yes, blame are the teachers. We are at fault. We are the ones dealing with these kids every day and if they are not succeeding, we are doing something wrong. The older teachers can't succeed because they resist change. They won't even try sitting the kids in a horse shoe. They resist the workshop model. They fight technology. And, since most ATRs are older teachers, why bring them back when they will only worsen the problem.

The young teachers, as Chaz says, are pliable. They only ask "how high", when told to jump. And, when they don't produce, they can be shown the door. Without tenure, they have no job protection.

The UFT and the AFT are some of the most powerful organizations around. By standing against education as it is today, they will be standing up for teachers. If the Principals did not have such pressure on them to keep their school an "A" and "well developed" they might be more willing to hire some of the more experienced teachers. These are the people that know how to teach,no matter what the data shows. There were always principals who refused to hire experienced teachers. Even under the old transfer system, they hid openings whenever possible.

The NCLB laws are not only being followed in the United States, they are being adopted all over the world. We as educators must take a stand against them. Not taking the stand is the same as taking a stand against education.

(and all I planned on posting today were my pretty red pictures from Ikea--oh well, ranting is more therapeutic)
Posted by Pissedoffteacher at 1:26 PM

It is too bad that people like us don't get the chance to be interviewed by the press but instead they fawn all over Klein and his non-educator friends.