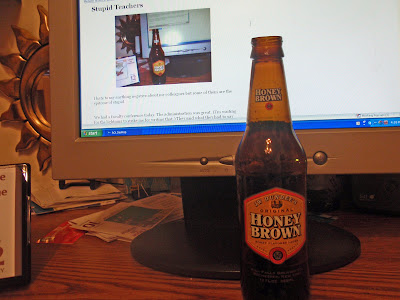 I hate to say anything negative about my colleagues but some of them are the epitome of stupid.
We had a faculty conference today. The administration was great. (I'm waiting for the lightning to strike me for writing that.) They said what they had to say and were ready to let us leave early. You would think veteran teachers would appreciate this and keep their mouths shut. But, this did not happen? NO!!!!!!!
The APO was talking about protocol for regents exams. She pointed out the problems with cell phones in the past and told everyone proctoring to collect phones at the start of the exam. She said she would provide rubber bands to attach phones to ID cards so the phones would be easy to achieve at the end of the exam.
Sounds simple, right? Sounds uncomplicated? If I was not in the room I would not have believed the comments I heard. "What if a kid forgets?" "What if you hear a phone go off?" "What if the sky is falling?"

We finally have a principal that respects the staff and respects our time but we still work with a bunch of morons that cannot possibly think for themselves or get through a forty minute meeting without hearing their own voices.
I need a drink.
Posted by Pissedoffteacher at 5:57 PM

What if these fearful nitwits stopped engaging the administrators running these meetings with their neuroses? We could all enjoy an efficiently run succinct meeting!! But no, the passive-aggressives and the masochists win!! The meeting is their only forum!! Shut up and go see a mental health practitioner!!

I engage my alternate personalities when it comes to these meetings. It is the only way I survive them. Too bad we can't just pummel those who abuse this forum. But then, we are civilized educators... right?
You are the kind of teacher I am looking for as I begin my search for people who may be interested in my novel. It is about the fun adventures of a veteran middle school teacher. I posted the first chapter on my site, www.tomsboomertimes.blogspot.com., and invite you and your readers to check it out. I will definitely be back to your site. Take care.

I'll do you one better- our principal is very good about NOT holding faculty conferences- and on the rare occasions we do have them, they are during lunch, and the day and times are posted.

Yesterday, when it was clear that there was to be no faculty conference, the brown nosers actually went to the principal to REMIND HER THAT ONE WAS SCHEDULED as per our teachers' handbook.

Just slap me silly- I can't take these people.

I'd like to slap THEM silly and then go home and open a nice bottle of Chardonnay to celebrate the occasion. What does anyone NEED a faculty meeting for, anyway? These people are from a parallel universe.... A memo will do, thank you. We of this universe can and will read.

I play Keener Bingo at staff meetings.
Either of the two major offenders who can be counted on to offer some bit of wisdom makes the inevitable comment and it's B. Next comment: I. And so on. When I get a BINGO, I promise myself a drink. Then I start it again. Staff meeting record: 3 2/5 drinks.
I've taken to making it a pool with other people at my table, which is a whole lot more sociable and it encourages professional development. Pick the time in the meeting at which the first BINGO will be called and your drink is bought by the others at the table.
Hey, it's how we survive. Nothing unprofessional about that.

That meeting was incredibly brief