Should We Program On Grades Alone? 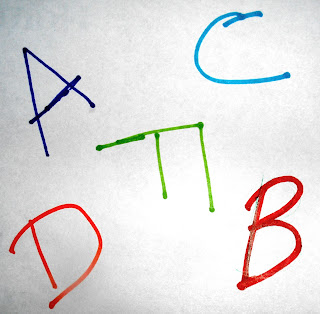 Should kids only be programmed on grades? Does a number say it all? How about the the human touch? What is wrong with undertanding why the grade came about and take other things into consideration.

Case one: Farah is in a specially created math class for slower learners. Her teacher is going at a nice, slow pace and building her confidence. Farah is finally getting the math and getting grades in the 90's. Should Farah be moved into an honor class? Does the 90 mean Farah no longer needs the TLc she is being given?

Case two: Luis is brilliant but very hyperactive. In tenth grade, he chewed up an empty coke can because it was there. Luis does not always perform well on exams because his mind works quicker than his pen but anyone observing him would see that he is miles ahead of everyone in the room. Should Luis be doomed to slower classes his whole life because of his test grades? [Luis was my student. I realized early on how bright he was and arranged for him to be on the math team. Luis is now in his junior year at a major university studying computer engineering.]

Case three: Karla cut half the semester. When she decided to stop cutting, she returned to class and her grades soared. Her final grade was still quite low due to poor attendance and missing exams and homeworks. Should she be programmed baded on this grade?

Case four: Donald would come into class and swing from the ceiling lights. He had trouble focusing, partly because of his ADD and partly because he was bored. He was placed in a slow class based on this grade? Was that the correct thing for Donald?
Posted by Pissedoffteacher at 6:38 PM

I find myself asking the same question. I have a young lady (I blogged about her in my most recent entry) who totally flubbed the ELA exam last year and so ended up in a "slower" class. But she is very intelligent, works hard, and behaves well. Should she have gone into the slower class based on one test?

When my son, who managed to be both gifted and learning disabled with the organizational problems that implies was in 7th. grade he was in the next to the top of 5 tracks in Science. He failed to hand in a lab notebook two out of the four marking periods so despite getting a 95 on the final they put him in the bottom track in 8th. When I complained i was told he would have to " earn his way out.". Every time the teacher would teach something that he already knew about he would add everything he knew to the discussion. Whe the teacher would say that they didn't cover that in this class he would say something to the class like, "Yea, because that's because this is the dumb class and they think we wouldn't get it. I had reached the point by then that I told the school they had created the problem so they could fix it. He was out of that class by the end of the second marking period. Sounds to me like more parents and teachers need to start thinking about what makes kids behave the way they do rather than looking at them as problems.

Anon- I agree that as educators, we do have to look at the bigger picture at times. Having said that- I teach Regents science to accelerated 8th graders. There is a lab requirement put in place by Albany that I have no control over other than to make sure the kids meet that requirement before being allowed to sit for the Regents exam. If I observe a child in 7th grade with organizational problems such as you mention, and neither the parent nor I can find a way to assist the child, it is recommended that the child be removed from the accelerated class. I make the recommendation because there is no point at this age to stress the kids more than they are already. A child with organizational issues doesn't need to be pushed- and with the high school application process being what is it in NYC schools, would you rather your child have a low grade in an accelerated class, or a 90 or better in an on level class?

Things are not always in black and white.

17, you make some great points but I have to agree with Anon, at least in high school and in math.

Too many kids act out because they are programmed incorrectly. I really believe that first we should do grades and then look at the individual, or at least recommendations from individual teachers.

Many kids cut because the classes are too hard and it is better to fail for cutting tan being stupid. Others don't go because they are repeating the same stuff they learned 100 times before.

PO'd- I agree with your points as well. I know that there are kids in all my classes who don't hand in work not because they don't want to do it, but because they simply can't do it. Many of them have undiagnosed learning disablities which precludes them from focusing long enough to figure out the task. Often, if I sit with them and walk them through it, they can tell me exactly what needs to be done.

It's a complex situation- I'm not even close to having the answers.

Of course not. However, the test grades are a major factor in the student's grade.

As 17 states there are some exceptions to my grading based upon the student's circumstance,

I'm not talking about grading. I am referring to the use of grading. There is a big difference.

I teach foreign language, and I'm also certified in Math. In my mind, they are both skills-based classes. I had the crisis of conscience in my first year when I had a capable student going through a deep depression. Her first semester grade was so low that she needed a high B in the class to pass. She worked hard, and by the end of the second semester, she was making Bs. Her average, however, was still an F for the year. I cried with her when I told her.

The next day, at an end-of-year faculty meeting, the principal implored the teachers to make sure that all their term grade numbers matched if they passed students with failing grades. It was an epiphany for me. I told the student that I would give her the minimum passing grade, because she had met all the objectives for the course. In foreign language, the ultimate goal is to be able to communicate at the given level. She had proven that she could. Her numbers did not define her.

So I developed a set of criteria that I use for students who fall a few points short: 1--They must not have given me any trouble. 2--They must make up all their tests. 3--They must come for tutoring. 4--Their grade must be improving at a rate such that if school lasted a couple more weeks, they would have passed on their own. 5--And this one is the critical one: They must earn at least a 75 on the final exam. I create the final to be an assessment of their skills on the objectives I consider to be minimum for successful transition to the next level. If a student can perform at the next level, I think it's pointless to have them repeat the class because their numbers didn't add up. If they give me a hard time, they get what they get, even if they fail by a tenth of a point. The hand that feeds you doesn't let you bite it.

At least you're in schools that actually program kids based on some ability standard rather than for administrative programming convenience.

But we also don't want to have classes considered " dumb " classes and "smart" classes.

But I have usually found that students perform better, behave better, and make more effort in classes of similar ( whatever ) ability levels

I agree with you about hte programming--if they can do the work, they do behave better.