The hawk was back so I took out my camera in hopes of getting another picture. I guess it was good that it was not around. The kids always go nuts when they watch this guy devouring a squirrel.

While the camera was out, I asked if I could take a picture of T. If he only put the same effort into math that he puts into coordinating his clothing he would not be stressing over whether he is passing this class or not. 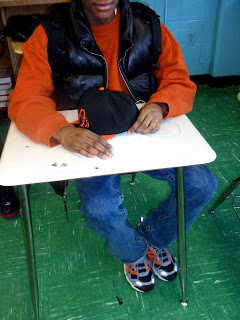 These two had to get into the action and get a picture taken. I managed to use photoshop to crop out the faces. Too bad I can't show them. The boys eyes twinkle. The boy is really trying to pass this class (too bad he started trying so late in the term) and the girl is a pain in the you know where. 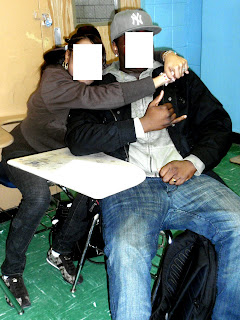 The kids were working on a practice sheet for our "Last Chance Harvey" exam. (One last test to try to pass the semester--they seem to relate to movies better than they relate to math.) And, surprisingly enough, it worked!
Posted by Pissedoffteacher at 8:26 PM