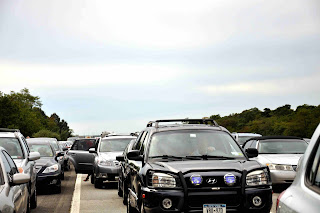 ﻿
A driver was stuck in a traffic jam on the highway outside Washington, DC. Nothing was moving. Suddenly, a man knocks on the window.

The driver rolls down the window and asks, "What's going on?"

"Terrorists have kidnapped Congress, and they're asking for a $100 million dollar ransom. Otherwise, they are going to douse them all in gasoline and set them on fire. We are going from car to car, collecting donations."

"How much is everyone giving, on average?" the driver asks.

The man replies, "Roughly a gallon."

Posted by Pissedoffteacher at 4:03 PM

TOTALLY stealing this! Where do I donate?!
(also, I found it kind of funny that my verification word is "BOING"!

An oldie, but a goodie.

At first, I thought the traffic jam depicted was due to the Occupy Washington, D.C. march. (My husband attempted to drive home from downtown Chicago, & was delayed--in a traffic jam--by 1,000+ marchers.)
He wasn't happy, but I said,"Yay!" to myself.

Actually the traffic jam is on the LIE. I took picture as we sat in stand still traffic for 20 minutes.