Holiday Time In the City 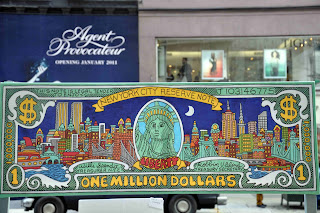 I love the city this time of year.  I took advantage of yesterday's beautiful weather to hit the streets, camera in hand and go in search of my favorite windows.

My first big disappointment was the lack of trains in the Citicorp Building on 51st and Lexington.  That was always one of my favorite stops.  (Still is a good place to go if you need a bathroom in that area.)

Next, it was on to Bloomingdale's where I was again disappointed.  This year, they had LDC screens in the windows, showing various winter scenes and a few holiday messages.  Bloomingdale's always had great ones in the past and was one of the only stores to recognize Chanukah.

Next stop was a good treat--Coldwater Creek on 68th and 3rd.  I thought everything was 25% off but when I got there, I found I was wrong.  The store offered 35% off total purchase.  I managed to score an expensive pair of jeans I've been eying forever and a few other things that were also on sale--all less than the jeans would have cost alone.  They even had platters of fresh fruit and cookies for their customers.

After spending away, I got treated to hundreds of Santa's pouring out of the 68th and Lex subway station.  They must have been going toSantacon in the park.  I walked over to 61st and Madison to see Barney's windows. This year they featured all the chef's of the Food Network.I also stopped in the NYC Palace.  That place is magnificent.  I can't believe I've walked by it hundreds of times and never went in until now. Then, it was back to 5th to check out Bendel's.  (I saw Bergdorf's, Sak's  and the Rockefeller Center tree last weekend) and then it was back to Park to see the holiday fair and train set up at Grand Central.  (Anyone with kids must go see that model train set up.)  I headed back to 5th to see Lord and Taylor and then down to 34th for the best windows and store displays--Macy's.  These windows actually tell a story.

Enjoy the pictures and go see the sites for yourself if you live in the city.  Don't be lazy.  It is one of the perks of being a New Yorker.
Posted by Pissedoffteacher at 4:46 PM

Agreed..this is what I did last night. Always enjoyable.

I was disappointed with the Saks windows though. So far, Lord & Taylor and the Macy's story windows were my favorite.