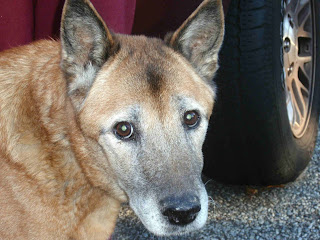 Jay was walking down the street when he saw Joey hitting a dog with a big stick.

Jay:  Hey, stop that.  This dog is a great dog, possibly the best dog in the pack.  He has done great things for the neighborhood.

Jay:  I know the dog barked at you, but he was frustrated because you kept pulling his tail and wouldn't stop.

Joey:  You are right. He is a great dog. [And then Joey picked up the stick and hit the dog again.]

The words dd not stop Joey's attack on the poor dog and the dog did suffer.  However, the dog recovered but never forgot.  The dog, once loyal to both was now loyal to neither.  He went on his way, playing with the children on the streets, protecting everyone in the neighborhood from robberies and muggings.  That is, everyone except Jay and Joey.  When he saw them attacked, he ran away.  He did not want to get beaten again for a loud bark.

Jay still has a chance to offer this dog and all other dogs protection.  Hopefully he will decide to use it.
Posted by Pissedoffteacher at 6:40 AM

Hmmmm. There's probably a very good story behind this.

Joey is a total idiot and Jay's actions were totally inappropriate.
Joey seems to be the one in charge, but both do not really care about the well-being of the animals that serve them. (If Jay is in charge, then it's in title only because Joey rules the show.) The dog may have only barked for now, but soon he will have his chance to bite. Go dog!!

It's funny that when Jay is given an opportunity to show leadership, he doesn't. And that Joey confuses power with leadership.

Can I send this to my mentor? This is the story of my me, mentor, and principal.

Beautiful writing. (this time I was focused).