We Are Graduating Illiterates 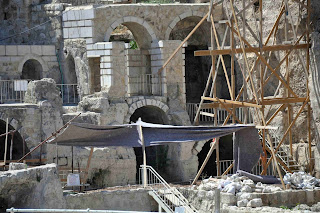 Finally, what I and thousands of others have been saying for years. Anyone who doubts the validity of this should just pay a visit to any community college math class. And, it does not have to be a remedial one, although I will begin this post with a few thoughts on some of these.

Last semester I taught a second term remedial class at the college. We began with close to 30 students. From the 30, I managed to hold on to about 20 (and this took great effort). Out of the 20, approximately 8 got through and this was better than average. Many of the students had no idea as to what was expected. They were used to make up exams, extra credit, calculators and being allowed to be out as much as they wanted. They were used to not doing homework. In other words, they got used to being passed for doing nothing and they expected this to continue.

Now, the first real class for credit, the one that comes right after the remedial course, the course taken if the student scored at least a 75 on the algebra regents. Those students coming from the remedial class usually do okay in this class, not great but they manage to get through. Those coming from high school are usually not so fortunate. More often than not, this class is taken at least twice, sometimes more. The students cannot factor, or graph. They cannot even handle signed numbers, yet the high schools have determined they are competent enough to graduate. Even the pre-calculus course that comes next finds these students struggling. The foundation they needed in high school and earlier was never built. Like the buildings built on swamps, these students are tumbling down.

The high schools had to do this. If not, they would have had lower graduation rates and the city would have shut them down. Luckily, the colleges still have standards.

So now more money is being spent to generate reports showing what every high school and every college teacher has known for years. What a joke! What a travesty! What a waste! There will still be no real plan in place to help. Yes, there will be a change in curriculum and there will be something else to hold teachers accountable for but there will be nothing else. Nothing changes but the name of the game.
Posted by Pissedoffteacher at 11:36 AM

I taught remedial for three years at Brooklyn college. The students were so use to using a calculator that most of them even forgot how to basic long division or multiplication. Also, the reading skills were so low that simple world problems stomped them. I started to wonder what was being taught in middle schools and high schools in New York. This year Brooklyn college is working on canceling these remedial classes for good and raising their bar by requiring an 80 on the algebra regents just to get into brooklyn college. Now that I plan on going to teach middle school or high school in NYC would I be able to change that or just going to get worse?

A disgrace but the bigger disgrace is that the Bloomberg & Klein led Dept of Education by issuing the diploma in fact are responsible for certifying this fraud.

I agree with you completely.

I couldnt agree with you more. I teach in a local high school and we are under tremendous pressure to pass students along and get the regents pass rates up. The regents is a joke as far as the level of the questions and the scaled score. Since when is a 30 out of 84 equivalent to a 65? when we grade these tests other than the multiple choice very few can answer the open ended questions. Then these students are passed along to the Advanced math classes and we are expected to find ways to pass them even though they are excessively absent and late, dont do homework, do minimal classwork and dont have the fundamentals necessary.

And of course teachers are to blame and Bloomberg/Klein and the papers just put a postivie spin on these and continue to go after the teachers.

I feel the same. In my building, teachers are held accountable for the number of Fs they give. Teachers are also blamed for failing students, with no accountability on the student or parents. I once had meticulously documented one case, and the admin told me that I had to give a student another chance despite a long documented history of deceit, lying, and late work. Public schools are expected to crank them out, sometimes it feels like assembly line work.

I agree completely. In my school teachers are blamed for the number of Fs they give. There is no accountability for students or parents. Teachers have little option but to pass along students.

Are you so math-centric that comments that touch on other subjects offend you so much that you censor them? I can't understand how math teachers can be so upset that their students "cannot factor, or graph. They cannot even handle signed numbers," but you have no problem when a reader points out that a math TEACHER can't spell or use appropriate words. C'mon: "world problems stomped" them? As a non-math teacher, I am long past the days when I had to factor or graph anything, but being able to use the English language properly to communicate clearly should be the very minimum demanded of students AND teachers.

I don't buy the premise that this is like texting, where spelling and grammar doesn't count. Your post was entitled "We Are Graduating Illiterates." Is it any better that we are allowing illiterates to teach? Or are you saying that the errors in the comments section of a blog don't show anything? If so, then I say that the math errors of your students aren't important either, since they're not the ones who will go on to use math in their careers.

If we are so worried that kids need the subjects we require of them, why do we just give a pass to those who teach them? If we do that, then we are actually saying that it's OK to forget subject matter as soon as a course is over.

Sad, very sad. I can't take seriously any suggestion that all students need to learn algebra or geometry because I know very well that I never use any in my adult life. By censoring comments about the writing skills of teachers, you are essentially agreeing. This person doesn't teach English, so he/she doesn't need those skills, just like I don't need the geometry I found so difficult when I took it back in HS.

I just read this post and don't know if this is the post with a deleted comment. While we all make errors, I think it's important that teachers proof what they send out--especially to parents and students. Sometimes when I review my own work, my mind passes over the errors. I do type fast when I write comments. Then when I catch an error after pressing "publish", "share" or "send", it bothers me.

Bothers me too. Many times my son will send me a correction for something I missed on a post. I appreciate getting those. There is no need to be nasty as that commenter was.

Something like this happened over at NYCEd. One person got pretty nasty over a comment filled with errors. I did point out some things that I thought he/she should be aware since it was posted on an "education" blog, and the person stated he/she was a teacher looking for work. But the person with all the mistakes got pretty nasty too. Not at me, but the other comment.

I once sat on a C-30 committee and couldn't believe the resumes coming from people wanting to be principal of my school. Of course those that are principals might walk the walk and talk the talk, but are just as ineffective--especially in the area of personal communication skills. I hate those nasty memos and disrespectful overtones at meetings or on the PA.

The CBS evening news did a report on those who are not ready for college. The "expert" said we need longer school hours and year.
It's not going to make a big difference if the child is not supported at home, has challenges the school or parent refuse to recognize so they miss out on needed services. The curriculum needs to be streamlined. It can't remain a mile wide instead of a mile deep. We cover more concepts in the least amount of time and expect students to understand and retain the information.

Lack of literacy effects Math performance today as well because more Regents problems actually require understanding as well as Math manipulation. Don't be afraid to fail students. Everyone in my family, myself, wife, and kids all failed something once and we survived and thrived.

The tragedy is when we expect a student to learn subject matter that is way above their current level or do not give them enough time to learn. Five years of HS would be beneficial to a large segment of the NYC population; just make it doable and meaningful, please.