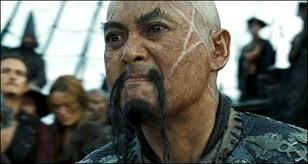 It must be hard to adjust when a person emigrates to one country from another.  Cultures and customs are different.  While it is possible to hold on to some traditions, others must be left behind.

I was thinking about all of this while reading Sun Flower and The Secret Fan, by Lisa See, which takes place in nineteenth century China.  It is the story of two young girls.  (I won't go into all of that now, except to say it is a wonderful book.)  Women are nothing in that era.  They are taught to obey their fathers, obey their husbands and then obey their sons.  Not only was the male figure the dominant one, the oldest male ruled the roost and everyone kowtowed to him.

A Chinese male who has been raised in an environment like that, a place that has not evolved much from the nineteenth century might still have these values.  And, if he happens to have a position of authority, or a job that puts him in control, he will expect others, particularly women to obey him blindly.  He might even think of himself as a father figure.  These even might account for the preponderance of young female Asians hired to work for him.

This idea of the male elder being everything goes totally against the American way of life.  Culture or no culture, a revolution is needed to take a man like this down.  Fortunately, there are not too many of these old time thinkers around.
Posted by Pissedoffteacher at 12:19 PM

Wrong. Its just a surface, whereas in reality woman were rulers of the Asia especially China, Korea and Japan behind the scenes. Take nowadays China - man is a slave in the family. Try to talk to some guys with Chinese wives - believe me they will have a lot of stuff to tell after a glass or two.