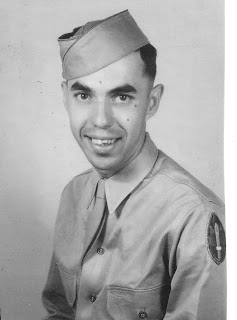 This is my dad.  He was a medic during WW II.  He served on the front lines of Germany and France.  Often he had to amputate legs and arms and do all sorts of other stuff to save lives.

During the Battle of the Bulge, he had to take off his medic helmet and pick up a rifle to hold Germans off until back up forces showed up in the morning.

My dad never liked to talk about his war experiences and only started after I saw Saving Private Ryan and asked him tons of questions.  Now, he doesn't stop talking.

Veteran's Day honors my dad and all the veterans.  Thank you.
Posted by Pissedoffteacher at 8:23 PM

Love these pics. And thanks for "Liking" my dad's pic on FB. Men like our fathers have really been through a lot--including the Depression. We owe them a lot.

Wow, I had no idea your dad was a vet. What a nice tribute to him.