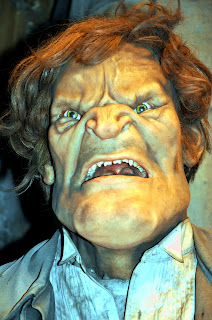 
Ok. After I posted my last comment, I started to get curious about WHO runs RMT? Interesting that it is anonymous, yes? Here is the link to the info I found on its IP address - http://www.ip-adress.com/reverse_ip/174.120.49.148 - but no info on who actually owns the site. (Yes, I used to be a public librarian and now I'm VERY curious). Why don't they name themselves? And how do we find out who runs it? (You know they're in it for the advertising money). Anyone else want to investigate?


Personally, I have a hard time taking RMT seriously. I actually think it fits in perfectly with the Neo-Con agenda of undermining civil servants and wouldn't be surprised if it were sponsored by folks who support the privatization of education (and everything else for that matter) and reducing teachers to clerical staff rather than trained professionals. For a good laugh, read those anonymous comments from teenagers whose frontal lobes are not fully developed (according to the brain research I've read) and who reside in a state of narcissism and are therefore somewhat incapable of contextualizing their educational experiences or taking FULL responsibility for their own contribution to their learning (and no, I was no different at their age, but I am from a different generation where my parents reminded me of my responsibility rather than believing and enabling all of my self centred adolescent narrative). The comments say as much about the writers themselves as their teachers.
On another note, I've emailed the RMT people 4times to get my name removed (I no longer teach at the school I'm listed at and have in fact changed my teaching area) and have had no response. Does anyone actually work there? Has anyone been able to delist themselves? (The school I was at now lists Principal Skinner and Chuck Norris among others as illustrious instructors - it's a very well taken care of website!! ;)

I know what #120 means.  Several months ago I found myself lumped together with a secretary and a language teacher.   It is obvious to me, from reading the comments many belong to the others.  I've written to RMT to make the change, but they did nothing.  No one should take this site seriously but sensitive people can't help but be hurt by some of the comments.  There has got to be a better way.
Posted by Pissedoffteacher at 1:30 PM

I used to have a pretty good rating, but they've now incorporated it with at least two other people who share my name, one of whom is not even the same sex as me. Now it appears anyone with my last name has some sort of multiple personality disorder. I wrote them to complain and they ignored my email.

A particular last name has virtually disappeared from the Packemin RMT website. Other names were so mispelled I suspect those inputting the data were barely literate.

You can't take these seriously. I use to go in and make absolutely ridiculous comments about colleagues, just for a chuckle.

Essentially it means nothing.

It is upsetting that a disgruntled student is able to slander a person without being able to rebut the claims. It seems that most people who post have a gripe and the problem may have been with them, not the teacher. Maybe there was one class of students that was a problem, so the teacher is judged by this one experience.

A teacher who might have hundreds of students who really learned a lot and enjoyed a teacher's class usually doesn't take the time to post. This site should not be taken seriously.