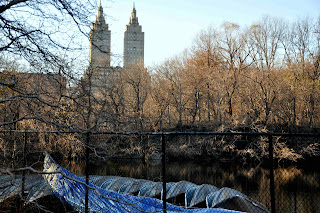 ﻿
It finally hit me.  I don't have to worry Sunday about what I will do on Monday.  There are no lessons to write, no papers to mark, FREEDOM!!!!!!

To celebrate, I decided to visit the Jewish Museum today.  The Radical Camera:  New York's Photo League, 1936-1951 is my kind of exhibit.  These wonderful photographers were really photo journalist from the era mentioned until the Communist witch hunts of the 1950's put many on black lists and ultimately led to the demise of this institution.  Anyone interested in history will love this exhibit.  Anyone following OWS will frown at the same issues photographed in the 30'.  No photo are allowed in the exhibit so you'll just have to go see it yourself.  (I did see lots of similar subjects to the kind I usually take.  Who knows, maybe one day I can have an exhibit somewhere as well.--my bathroom walls!)   In addition to this exhibit, there is one on Ezra Jack Keats.  I learned that he was the first to illustrate a book with an African American child, a child like any other who just happened to be Black.  He didn't see why race should enter into a book about a child and he never mentioned race.  His art work is exceptional and this exhibit alone would have made the trip worth while.    There is also a great menorah exhibit, menorahs picked out by Maurice Sendak.

In the past, a Sunday afternoon excursion would have ended early, but not today and not ever again.  I then headed to the Guggenheim to see the Maurizio Cattelan exhibit.  The line to get in wrapped around the block, but thanks to my husband's previous employer's sponsorship, I got in immediately and at no cost.  Time Out NY didn't particularly like this exhibit, but I did.  These strange sculptures, from Kennedy in a coffin, to the Pope being struck by a meteorite, hang from the ceiling and as you walk around the rotunda and get a close up look, you will not be sorry you came here.  Cameras were allowed and I was glad I had mine.  Pictures here.

The day was cold but sunny.  Still, in no great hurry, I walked through Central Park and ended up at 57th and 6th.  I saw parts of the park I never saw before.

Yeah!!!!  No more weekends spent getting ready for the week to come!
Posted by Pissedoffteacher at 9:56 PM