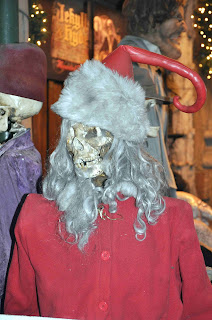 ﻿
Yesterday, on his way to the post office, my dad fell.  Thankfully, he is living in Co-op City, one of the best places in the city, and people were around immediately to help him.  A security guard called me twice, once to tell me what happened and that he called an ambulance and a second time to give me the name of the hospital.  The construction workers around stopped what they were doing to care for him.  The Bronx, and particularly places like Co-op City, aren't touted as good places to live, but as long as my dad can live alone, I wouldn't want him anywhere else.

The ambulance took him to Einstein Hospital, the hospital I credit with finding his cancer and saving his life.  And, while I will say thank you to the doctors for fixing him up, I will say BAH HUMBUG when it came to patient care.  We waited hours to see a doctor and even longer (almost two hours) for the nurse to bring the pain killer he ordered.  There was a machine behind my dad that beeped non stop and no one bothered to turn it off for more than a few minutes at a time.  Before we left a patient advocate let us know all we had to do was hit a yellow button and it was a shame we weren't told this.  My dad missed his turn at x-ray because no one came to pick him up and even when we were told we could leave, it took another hour and a half to get tubes removed and papers signed.

I had a long conversation with the patient advocate as we waited to depart and let her know all my concerns.  She listened, upset at what I told her and said to say something earlier next time.  The truth of the matter is I would have except I watched the poor staff run around, like chickens without heads, doing their best to take care of everyone.  No one was sitting around shooting the breeze or having a leisurely cup of coffee.  These nurses, techs and aids were providing the best care they could.  There just was not enough personnel to handle the patient load.  The PA that took care of my dad was a fine young man who was running in a hundred directions at once.  By the end of the night, I wanted to tell him to lay down in the bed my dad was vacating. (He looked like he needed it.)

ER's take care of sick people.  They save lives.  The people that work their deserve decent paychecks and the utmost respect from everyone.  Hospital administrators need to see how overworked and overwhelmed these people get and they need to do something to alleviate these working conditions because, unless these conditions are improved, lives will be lost.  But hey, ERs like this take care of us 99%ers and the people in charge don't much care.
Posted by Pissedoffteacher at 4:16 PM

Oh my gosh, I hope your dad is ok. Nothing's broken, I take it?

You are so right about ER staffs being so overworked. Our closest hospital is also the biggest trauma center in the area. (Even though it's technically in the suburbs, it's where they bring injured Chicago cops and firemen.) The wait can be ridiculously long because they just never seem to have enough people. But the people who are there are always busting their butts.

I remember once driving my grandmother to the emergency room at Maimonides and waiting there til 3 in the morning. How could they treat an older woman like that?? And I did open up my mouth, but it did no good. I noticed they took ambulance patients in first and wished that I had called the ambulance instead. Now I see from reading your post it would not make any difference today.

When I was having a horrible cough and feeling badly, I called my doctor who told me to get to an emergency room and get a chest x-ray. I knew what I would be in for and didn't want to go. Then I remembered First Med had an x-ray machine, so I drove myself there and was in and out within an hour with a script in hand. I asked them to call the script in so it would be delivered to me.

The longest I ever waited in a First Med was 2 hours--the shortest a half hour. The average time, one hour. I have seen older patients put on gurneys and ambulances called to get them--not that they rushed either. At least that patient got seen by a doctor and maybe something good came of it by the time the patient arrived at the hospital.

Emergency rooms are a horror--not like what we see on TV--and it's been over 40 years since I took my grandmother to the hospital. It's really sad that nothing has changed.

I am glad your dad is okay. Falls are a terrible thing.

My dad has a fractured shoulder and it was dislocated. They were able to sedate him and then put it back. They taped the shoulder. He is in a lot of pain and is staying with me.

OMG!!! Since you didn't exactly say in the post, I was hoping he was okay. To keep someone with a fracture in pain, especially an elderly person, without meds for 2 hours is criminal. What a strain on the heart!!!

At least you can follow up with a good orthopedist. Although I have found their waiting rooms even worse. That's why I now pay full price to see someone who doesn't take GHI at Hospital of Special Surgery. Many of their doctors have satellite offices on Long Island. And the parking is free.

If I don't like a GHI doctor,and the condition is serious, I will pay out of pocket if I find someone I like. I had a great GYN (not OB) who didn't take the insurance. Many teachers went to her. When she moved away, she sold her practice to a wonderful doctor who accepts GHI. Through word of mouth her practice has grown, but thankfully she is not OB, so the wait time is great. I love not having a million people with the same appt time.

I think you should write the hospital and tell them of your experience. Meds should not take that long even if the pharmacy is backed up. Pain meds should be available to the emergency room staff.