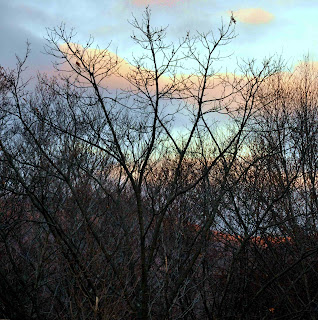 (sunrise in the Berkshires)
﻿
It began with a phone call saying I won a free weekend in the Berkshires.  I was at work and the caller wouldn't give my husband any information.   She made arrangements to call back when I would be home.  When she called she wanted to know if my husband was around too.  Since it didn't feel right, I said no and told her to call back on the weekend.  Putting two and two together (I am a math teacher after all) I figured out the call was for a time share and I was going to turn it down.  But, being semi retired gives me lots of free time so we listened to the pitch and decided to go.  Unfortunately, the weekends available were no good for us.  My husband was disappointed.  I told him not to worry.  We would get a call back for another weekend.  Two weeks later the call came.

The sweet young woman on the phone promised us a free weekend in a one-bedroom condominium, breakfast and $125 travel expenses.  I asked her what the catch was and she assured me that we would only be required to listen to a 90 minute presentation.  We packed our bags and hit the road.

Saturday morning we were met by a real smoothest talker.  We told him we were sorry to disappoint, but we were not interested in making a $27,000 purchase.  He told us it was no problem, if we didn't buy, his next customer would.  He treated us like we were his best friends as he took us to breakfast and gave us a tour of the area.  He told us he made $180,000 a year selling time shares and told us how he makes money on the time share he owns.  (Told us how he does something unethical that we shouldn't share with his bosses.)  He was so charming that the non cynic would have thought they made a new best friend.

After 90 minutes we went back to the office and got hit with the hard sale.  When we repeated that we were not interested, he brought over his boss who came down almost 2/3 in price.  When we reminded him we were promised to be out of the meeting in 90 minutes and he got a little nervous about the noise we might make, he told us to go collect our money.  Of course we had to listen to one more sales pitch along the way.  This guy came down to $4900.  We still said thanks but no thanks, took our money and left.

Right now it is off season in the Berkshires.  Everyone in the hotel at the moment is on one of these free weekends.  An astronomical sum is being spent wining and dining them in the hopes of making a sale.   My feelings of sympathy for the poor guy not making a sale turned to ones of contempt when I realized how many people were being duped into spending so much money.  We wondered how many bought at $27,000 what was offered to us for less than $5000?  We wondered how many believed the hype about making $2000 or more a year renting out the time share.  (If this was the case, there wouldn't be so many foreclosures.) We doubted hsi $180,000 a year salary which he claimed wasn't so much.  (Living where he did, he could have lived like a king on that kind of income.)

All in all, buying one might not have been the worst idea in the world.  We might have bought if we didn't already own a vacation plan somewhere else.  Still, beware before buying.  Remember, these guys are not your friends.  And, never take the first or the second or even the third price.  You can walk out and then come back and take the last price when you know that is the lowest it will go.
Posted by Pissedoffteacher at 8:27 PM

I do agree people who took those bank mortgages that they now have defaulted also bear "part" of the blame for the economic ruin--but only part. When a "banker" tells you that you will qualify, when credit cards are sent to kids in college that have no income or to homes with very little income and told they can qualify, that's a pretty hard carrot not to bite.

when I first started teaching, I was turned down by the credit card company (tells you something about my starting salary), but it was the right thing to do. Then came deregulation, and thankfully I was a good credit risk before that, but not so many other Americans. Also the target audience for these loans didn't have accountants or their own tax preparers to turn to for advice.

As for a home away from home, I would rather buy the home or rent it, but I would never buy a time share.