My Money, My Decision 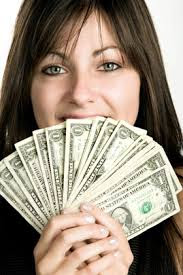 I lost one of my diamond studs and have been beating myself up over this loss for two weeks.  I thought about replacing it but being cheap, I also thought about buying a pair of fakes.  My husband insisted I should at least price a real one and after much hesitation I agreed.

We stopped at a jeweler I have known for years and while the price was high, it was not as high as I expected it to be.  I still hemmed and hawed.  The jeweler looked at my husband and said, "You are the one I should be discussing price with."  And then I lost it.  "My earring, my money, or rather our money.  Why should he be the one to decide!"  It might be the 21st century but men (thankfully, not mine) have this weird idea that a purchase like this one must come from one of them.  I was tempted to walk away but I really wanted the earring and the price was good, so I said yes.  But, I made sure the man behind the counter knew it was my decision, my decision alone.

I always paid my own way.  I raised my daughter to pay her own way and I even try to impress my female students (and male ones too) of the importance of paying paying for what they want themselves.  No one can be free without financial independence.
Posted by Pissedoffteacher at 3:01 PM

I'm with you on this one. I really wanted a pair of diamond studs and would never think of asking, or expecting, my husband to get me any. I bought them myself and paid for them myself.

What a sexist jerk!!

I'm with you as well!

You go girl! My similar pet peeve is when we had to have house repairs done. Several contractors REFUSED to talk to me unless my husband was with us. Others talked only to my husband as if I weren't there. My name is on the deed! We will only do business with contractors who treat me with the respect I, the homeowner, deserve. The ones who treat me right tend to be younger so maybe we educators are doing something right?

Nothing beats the Hyundai service manager (guy of course) who told me the "light wasn't on" when my engine light was on brightly for 2 days straight. When my husband arrived on the scene, all of a sudden it was on again.....another sexist jerk. As a result, Hyundai went down a notch. So far it's fixed and fine, by the way.