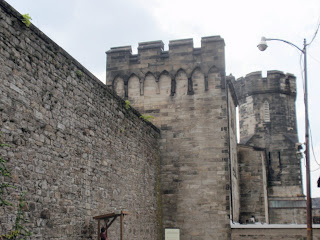 Our founding fathers built Eastern Penitentiary to treat prisoners humanely. Now, things did out that way. It can hardly be considered human to keep people in solitary confinement 24 hours a day, years at a time, with only the only light coming in from a small window in the ceiling, but humanity was the goal They believed that everyone had some good in them and if they repented (hence the name penitentiary), it would come out.

Too bad the powers that be don't feel the same about teachers. Rubber rooms are not much better than the conditions these men and women had to endure. 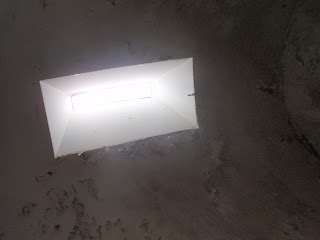 The only light in the cells. 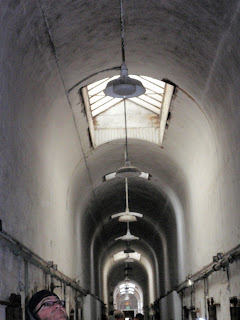 The long, gloomy hallways. Prisoners were brought to their cells with sacks over their heads to keeps their anonymity. 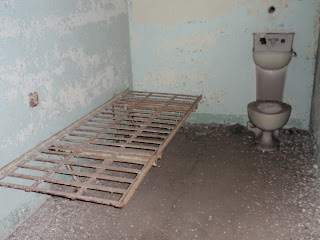 The cell which only had bed, toilet and a bible. 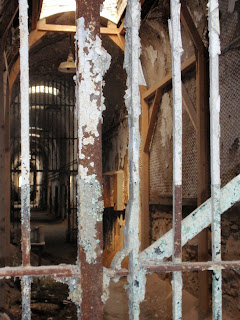 And, last but not least Al Capone's cell. 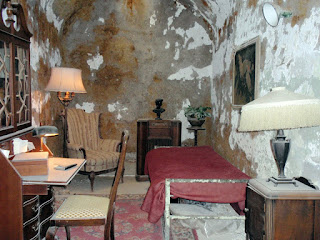 While prisoners had no comforts or luxuries, Capone had a double cell furnished as it is shown with a full radio in the back.

Thank goodness no group of people gets such preferential treatment today.

Posted by Pissedoffteacher at 9:56 PM

I love Eastern State Pen! This was part of our end-of-the-year trip to Philly with our students a few years ago!

Also something about Al Capone (If I remember correctly)...he was actually allowed to walk freely around the jail, while others were stuck in their cells. (My students were fascinated with his cell and this piece of information)

Do they still have one of the wings of cells blocked off? I had heard that that wing was possibly haunted.

I also thought the randomly scattered white ghost cats was a little erie.

It sounds like an interesting day. Hopefully your trip wasn't as hot as the day I went. (When our gude asked if there were any questions, our students asked, "Do you sell soda in the gift shop?")

We had a great day--not too hot.

There is a haunted part--only open for special tours on Halloween.

The cats are eerie but interesting.

We had a great day--not too hot.

There is a haunted part--only open for special tours on Halloween.

The cats are eerie but interesting.