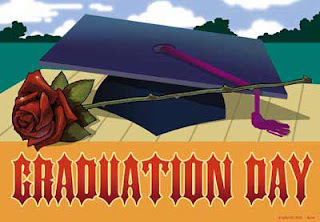 I'm sorry to say this, it makes me sound like a fool but, I HATE GRADUATIONS, yet I never miss them.

Last night, my friend Gina's son Billy graduated from high school. Gina's husband, Billy's dad, died two years ago. Billy loves having people lots of people around so Gina asked me to attend the graduation, which I did.

First off, let me say that Billy is not a nice person. He is rude and disrespectful to his mom and his mentally disabled uncle. He thinks the world revolves around. Part of this behavior is stuff he can't control, but most of it can be controlled. I know, he controls it when he has to.

Billy graduated from a high school on the ritzy south shore of Long Island. Snobbery was in the air. Journals were distributed with full pages full of the young high schools achievements, pictures and wishes from their families. They must have cost a fortune to produce. In spite of all this, it was great seeing Billy walk across the stage. He is a special education student that accomplished a difficult feat. I feel part of it. I got him through Math A.

My school had its graduation today. This was the first time graduation came a day after school ended. I actually got paid to go! This is the only per session I have done in years. I figured, since I always go to graduation anyways, I might as well get paid for the day.

This year's set up was better than last year's. The kids (all 950 of them) lined up in an air conditioned gym. It was pretty organized and the kids were well behaved. It took forever to get into he auditorium. Naturally, there were too many speakers and Suit managed to tell his stupid jokes. In spite of the length, it was nice. I would have cut the part where they do the Faces of Packemin HS. That could have saved 15 minutes. And, although the music was great, three pieces were unnecessary. One of them showcased the talents of a teacher. He was great but it was not appropriate here. Parents wanted to see their children graduate, not see this guy perform.

To me, the highlight was calling the kids to the stage to receive their "diplomas". It took over an hour to call 950 names and Suit posed for a picture with every kid (He must be exhausted afterward all that smiling.) While I hated waiting for it to happen, it was nice for the kids.

Afterwards, people milled around outside. I saw a few of my kids but there were just too many people around to really find anyone in particular. Just watching the proud parents and seeing the flowers and balloons was enough to make me glad I sat through that boring ceremony.

Worse than the speakers and the length of the ceremony was the traffic getting out. I'm smart. I parked right near the exit and walked a long way to the ceremony. It got me out 40 minutes sooner.

Graduations are long and boring. Traffic is terrible. I look forward to next year's event.
Posted by Pissedoffteacher at 3:58 PM

Of course the parents love seeing all those pics. We had graduation step-up easier by having the kids sing when the pics are shown. It's 2 for the price of one.

No news on Suit's retirement party?? Funny he didn't want to celebrate at the end-term party.

At least you didn't have to sit onstage. Nothing worse than sitting through the mind-numbing boredom that is graduation with everybody looking at you. This year was particularly bad, because our parent coordinator made a speech that made it sound as if she were running for local office.

There will be no mention of a party for Suit until Sept. I bet it will be a big one--and expensive. I"M NOT GOING TO ATTEND!

It's too bad that Billy is disrespectful to his mother. I wonder if that trait represents a symptom of the hard knocks he's encountered with losing his father and struggling in school.

Graduations are incredibly boring, mostly because they are predictable. When my older son graduated last year, the administrators obviously went to great lengths to ensure that the ceremony would go as planned without a hitch. There were plenty of threats...er consequences delineated.

Such are rites of passage.

No doubt that Billy felt a great sense of accomplishment, and that's what's most important.

Thanks again for the congrats :)

But it all makes sense why he didn't want Belle to get her own party. He was saving teachers the extra expense so it would go to him instead.

Some schools go overboard and get their admins trips to Europe.

What was the general reaction to his retirement news??????

I really don't know. I talk to as few people as possible.

The AP of pupil services gave me a big hug after the news was announced, so who knows what will happen?

I say, it's all in the planning. Muffy and I simply have the chauffeur garage the limo underground, and use the VIP exit. Why on earth do you even consort with the Bootless and Unhorsed?